When my itch for you surfaced like a drowned rat
in a swimming pool, I took the plea bargain.

Spent  the whole summer upstate. Fly-fishing
with my tongue. When you cast a lonely line,

I dredged my suitcase to the mouth of the river.
Your apartment is so tiny, I forgot that I promised

to sleep on the floor. I woke up to the cracking
of egg shells. A patient cup of coffee. You forgot

to cook the black beans. Spooned them raw
into my omelet. I swallowed each mouthful

of stones whole. The best way I know how
to love. You outlaw the apologies. Rip

the freckles off my skin. You ignore the blood
that stains the paneling. Too busy deciding

if my eyes look green or blue when I wear
that shirt. When you ask about the fanged men

from the locker-room, your voice is a funeral
organ. Never ask me to rewrite the endings.

Just pretend that I’m happier. The night we sucked
champagne out of each other’s palms, you mentioned

my spitball smile. Said I would have picked on you
in high school. The night you ordered a Screwdriver

at the dive bar, I laughed at you. Then stabbed myself
with it. I wait for her. Gnaw my fingers to pulp and bone.

The plain and proportionate girl. You will whisper
her name like a razorblade. I wrap our telephone wires

around my neck. You bought a letterman jacket
at the thrift store today. I won’t tell you that I imagine

you slipping it over my shoulders.
It’s already snowing upstate. 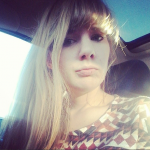 Chelsea Coreen is a full-time sparkle enthusiast. She was a member of the SUNY Oneonta poetry slam team and competed at the national College Union Poetry Slam Invitational for three consecutive years. She has been published in Art and Scope as well as Selfies in Ink, and recently released her first chapbook Glitter Bomb in March of 2014. Follow her on Twitter @chelseacoreen