Lately I have been meeting people in my dreams. People I know to be real but I have neither heard their voices nor known the smell of their skins, or known if their hearts beat slow like the steps of a child walking stealthily or fast like the neon numbers that flash so clear but are always missed.

Lately I have been talking to too many people who remind me of myself, or who I think I am. And every word they say to define themselves sounds like the words I wrote in a glittery blue journal when my hands were a bit too small to hold a guitar neck properly. I just clutched at the neck and the pen and the words in hopes that they would prove themselves true.

Lately I have been meeting people who can’t help but smile when they see fairy lights. Their skin mirrors the soft glow and each bud filled with stardust matches the lava in their eyes. I used to squint my eyes whenever I saw a string of lights, and when my world was filled with dots of white and yellow, I could pretend it was a clear sky, filled with stars, that I was seeing. That was when I could smile too. 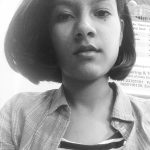 Satvika Jain is a 17-year-old from New Delhi, India. She likes cats, blue-colored things, old books, and new friends. In all of her works, I include the ocean and stars in some form.