After taking over the Old Hollywood Spotlight section last year, my goal has been to write about actors and actresses who were less known in the public eye yet still made a positive impact, as well as the foreign stars who tried their luck in American cinema and television. 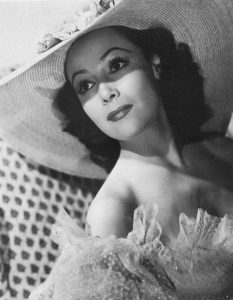 One of the actresses I have been wanting to spotlight since the beginning is Dolores del Río, the starlet of the 1930s and 1940s. Thanks to fellow Germ writer L.N. Holmes, (who writes the Women Writers Series that you should definitely check out!), I was reminded about del Río. You might have found the cover image familiar, and that’s because Google had a colorful and floral illustration tribute on their homepage last month. In this post, you will discover more about that familiar face. I now present you with the story behind the actress who was the first — and successful — Mexican star to do an American crossover: Dolores del Río.

Prior to the birth of her Hollywood career in 1925, Dolores del Río was born María de los Dolores Asúnsolo y López Negrete on August 3, 1904, in Durango, Mexico. In 1919, she was presented to the king and queen of Spain and studied voice in Madrid and Paris. She was spotted dancing in Mexico City by American director Edwin Carewe, who told del Río she belonged in movies.

Dolores del Río became known for her elegant and expressive face in silent films, for her exotic roles, and for being one of Hollywood’s first Latin stars. Her film debut was in the 1925 American film Joanna, where del Río was described as a “Spanish actress,” which she later had changed to “Mexican actress.”

Two movies later and her role as a French peasant in What Price Glory turned the crossover actress into a star in 1926, which lead to her first major role in Resurrection (1927) followed by the star role in Ramona (1928) at age 23 — for which she recorded a version of the title song. Her voice echoes that of Snow White from the 1937 animated film by Walt Disney. Ramona — which was directed by Carewe — was the first film with sounds (but without dialogue) by United Artists. As an adaptation of the 1884 novel by Helen Hunt Jackson, the 1928 film was about the young Ramona who faces forbidden love with a Native American; she finds out she shares half the ethnicity, so they get married but are victims of discrimination by Americans.

Dolores del Río’s interpretation of Ramona was described as “an achievement” by the New York Times. “Not once does she overact, and yet she is perceived weeping and almost hysterical. She is most careful in all the moods of the character. Her beauty is another point in her favor.”

As we have discovered in previous spotlights, colored actors did their best to avoid stereotypical roles, but in order to remain in movies, they took the work that was offered to them. Carewe did not want del Río to be typecast as an ethnic or exotic female. Unfortunately, del Río’s career was limited to stereotypical roles given by producers as a result of her race and accent as talking pictures became popular. As a result, the late 1920s and 1930s films showed her as a stereotype, including: The Loves of Carmen (1927), Revenge (1928), Bird of Paradise (1932), Girl of the Rio (1932), and Flying Down to Rio (1933).

Although she maintained her Hollywood popularity through the 1940s, del Río returned to Mexico, where she starred as the title character in Maria Candelaria (1944) — an Indian peasant who poses for a painting and is falsely accused of modeling in the nude by the villagers who later kill her. Proud to have participated in that movie, Dolores del Río’s acting helped the Spanish-language film win the best picture award at the 1946 Cannes Film Festival. Del Río also helped establish the Mexican film industry, and she continued to star in more than 15 successful movies in her native country throughout the ’40s and ’50s.

Del Río returned to America in the 1960s by appearing in the movies Flaming Star (1960) with Elvis Presley, Cheyenne Autumn (1964), and the Mexican-American production of The Children of Sanchez in 1978.

She was married three times: the first time at age 15 to Jaime del Río, in 1930 to the director Cedric Gibbons for 11 years, and producer Lewis Riley, who was with her when she died in 1983. Del Río died at age 78 in her California home due to her poor health.

Dolores del Río became a film star in Hollywood and in her native Mexico. She was a trailblazer for women and others who came to America. As Mexico’s leading actress, del Río won four Arieles (Mexico’s Academy Awards) and a Quixote (Oscar of Spain). She even became the subject of a portrait by Mexican painter Diego Rivera, and in 1960 she received her own star on the Hollywood Walk of Fame. Actress and friend Marlene Dietrich described her as “the most beautiful woman in Hollywood,” and with 64 American and Mexican acting credits to her name and as the first Mexican movie star to reach international success, it’s no wonder Google honored Dolores del Río.

Have an old Hollywood star you would love to see featured in this section? Share your suggestions below!