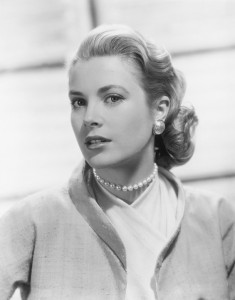 Imagine this: A girl moves to New York City to study acting at a prestigious theatrical school and then moves to Hollywood where she becomes a glittering star and a fashion forward icon — only to give it all up to marry a prince and move overseas to live the rest of her life as the Princess of Monaco. Sounds like a story made for the movies, right? Well, for one actress it wasn’t just another script; it was her life story. This is Old Hollywood Spotlight: Grace Kelly.

Grace Kelly was born in Philadelphia, Pennsylvania, on November 12, 1929. The daughter of a self-made millionaire, Grace knew from an early age the value of hard work and determination. These values would serve her well as they helped propel her dreams of becoming an actress into a reality.

Like most stories of trying to become an actress, the beginning was not easy. Grace’s parents openly discouraged their daughter from trying to pursue an acting career, but she was too determined to listen to them. However, she did have support from two of her uncles who had both found success in the entertainment industry — one as a prominent playwright and the other as a successful vaudeville performer. So, after graduating high school, Grace packed her bags and moved to New York City to study at the American Academy of Dramatic Arts.

Since the American Academy of Dramatic Arts was a theatrical school, it only took Grace two years to complete the program and graduate. With the acting school behind her, Grace was on the search for her big break. At first, she tried her luck on Broadway, but after failing to find any form of success there, she decided to move to Hollywood. By this time it was 1950, and Grace soon found herself landing bits on various TV shows. But soon success would be knocking, and one year later, in 1951, Grace landed her first movie role in the film Fourteen Hours.

From there, Grace’s career started to blossom; over the course of the next two years, she would continue to appear in television shows and would co-star in the movie High Noon (1952). But it was the film Mogambo (1953) that really made Hollywood execs and audiences take notice. Her performance garnered her a Golden Globe award for Best Supporting Actress and an Academy Award nomination for Best Supporting Actress. Exactly one year later, Grace would find herself nominated again for an Academy Award for her performance in the film The Country Girl (1954), but this time the nomination was for an even greater category: Best Actress in a film. Grace won the award — the only Academy Award she ever won in her career.

The year of 1954 was a busy one for Grace. In addition to winning the Oscar, she met famed director Alfred Hitchcock. This meeting would prove to be pivotal for both Grace and Alfred. Grace became Alfred’s muse, and during the course of their creative partnership, she appeared in three of his movies: Dial M for Murder (1954), Rear Window (1954), and To Catch a Thief (1955). All three movies not only became classics in their own right, but they helped cement Grace’s and Alfred’s statuses in Hollywood. Today, critics still hail these movies as some of the best directing and best acting in cinema history.

In 1955, Grace met the one person who could convince her to give up acting and who would change her whole life: Prince Rainier III of Monaco. Their romance was swift and a whirlwind. After dating for a year, Grace and Prince Rainier were married on April 19, 1956. Grace’s life was immediately different. Acting was no longer an option, and Prince Rainier went so far as to ban all of her films in Monaco. Even though she would never star in another movie again, Alfred tried to coax her back into the acting game for his 1964 hit film Marnie. Grace declined, choosing instead to devote the rest of her time “to many cultural and charitable organizations.”

On September 14, 1982, Grace was driving down the coast of Southern France with her daughter, Princess Stephanie. The road was infamous for its dangerous curves, and Grace was already familiar with it, having drove it once in To Catch a Thief (a scene that is still considered to this day to be one of the most iconic film scenes ever shot). Somewhere along the road, Grace suffered a stroke and lost control of the wheel. The car cascaded 45 feet down a cliff and into a ravine. Miraculously, Princess Stephanie survived the crash without any serious injuries, but Grace wasn’t so lucky. Grace Kelly lay in a coma before succumbing to her injuries the next day. She was only 52 years old.