Flappers, Charlie Chaplin, art deco, and the Charleston were among the iconic trends that defined the 1920s. Besides Chaplin and Buster Keaton, there was another actor who was doing comedy scenes with facial and physical expressions rather than verbal jokes as we are used to watching today. That other iconic actor was Harold Lloyd, the young man with the round glasses and charismatic smile. He was a silent comedian, a pr 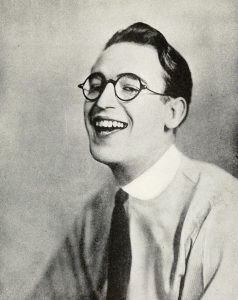 oducer, a screenwriter, a stuntman, and a photographer.

Born on April 20, 1893, in Burchard Nebraska, Harold Clayton Lloyd began performing on stage at age 12 — unlike Chaplin and Keaton who had vaudeville training at younger ages. Without much acting experience, but eager to make it in Hollywood when the film industry was in its first stages, Lloyd and his father moved to Los Angeles in 1913.

Sneaking into the motion picture lot with a crowd of actors returning after lunch, Lloyd was able to blend in and make it past the security at the gated entrance. He took small roles and befriended Hal Roach, who was in the process of creating his own production company. Roach’s film company made movies featuring Harold Lloyd as Lonesome Luke — a character inspired by Charlie Chaplin. Lloyd knew he couldn’t play a mimicry forever, so he set out to create his own character.

Lloyd wanted his character to be approachable, someone who looked like an ordinary person whom the audience could relate with rather than someone with a mustache, top hat, and cane. In 1917, he wore a pair of glasses, a straw hat, and a raggedy suit, but still he resembled Charlie Chaplin’s character The Little Tramp.

Then, in 1919, something unexpected happened. During a photoshoot, Lloyd grabbed what looked like a fake bomb and lit his cigarette. That prop however turned out to be a real bomb that exploded in his hand, costing the actor his thumb and forefinger. Following the incident, he wore a skin-tone glove, which allowed him to continue doing his own stunts and making audiences laugh without asking for pity if he had appeared with his impaired hand.

Lloyd’s iconic style featured ordinary clothes and round-rimmed glasses. He had developed a relatable character, someone who looked ordinary enough to be a friend or “the boy next door.” He was the comedian who didn’t rely on “comedy clothes,” such as clown-like shoes or a fake mustache to create his cinematic image.

Working in films at the same decade as comedic stars like Chaplin and Keaton seemed like a challenge, one that could result in dislike by Hollywood and moviegoers; but, on the contrary, Harold Lloyd did more films than both stars combined and had successful box office hits. By 1922, Lloyd transitioned from short films and small roles to full-length comedies, and by the mid 1920s, he had departed from working with Roach and began creating his own films in which he starred.

On-screen, he showed there could be humor in everyday life and that even the most ordinary person could find love, just as his character got the girl in the ending of his films. In his personal life, Lloyd also found romance with the leading lady Mildred Davis, with whom he shared more than 10 films, including the successful Safety Last! (1923), which named him the “king of daredevil comedy.”

Harold Lloyd was the number one box office star two years in a row, and in 1928, Variety considered him the highest paid film star. Besides acting, Lloyd developed filming techniques and was one of the first filmmakers to preview his work in front of a test audience before editing and previewing them again.

Unlike many of the silent film stars who didn’t make the successful transition into talkies, Lloyd starred in his highest grossing sound film: Welcome Danger (1929). Unfortunately, the stock market crashed 12 days later, causing the Great Depression of the 1930s, and audiences no longer paid attention to his films. In 1938, he sold the Harold Lloyd Motion Picture Company. 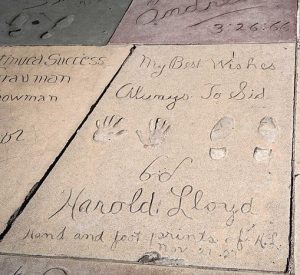 The Sin of Harold Diddlebock (1947) was Lloyd’s last motion picture since he no longer had as much control in the filming process as he did in his 1920s films. As a retired actor, Lloyd dedicated his time to 3D-photographing while he traveled during the 1940s and working for the Shriner Hospitals for Children; in the 1960s, he became the president and chairman of the board.

Among his recognitions, Lloyd received his own star on the Hollywood Walk of Fame (in fact, he has two stars!). Prior to this, he was the fifth film star to place his hand and foot prints outside of Grauman’s Chinese Theatre in Hollywood. In 1953, he received an Honorary Academy Award for Master Comedian and Good Citizen.

Harold Lloyd’s success as a silent comedy actor and film producer has gained recognition since the 1920s. His contribution to the motion picture industry has put him high on the list of comedy stars next to Charlie Chaplin and Buster Keaton. His films continue to be shown around the world during movie festivals to old and new generations of fans.

“Laughter is the universal language. It establishes a common identity among people—regardless of other differences. It is the sweetest sound in the whole world.” —Harold Lloyd