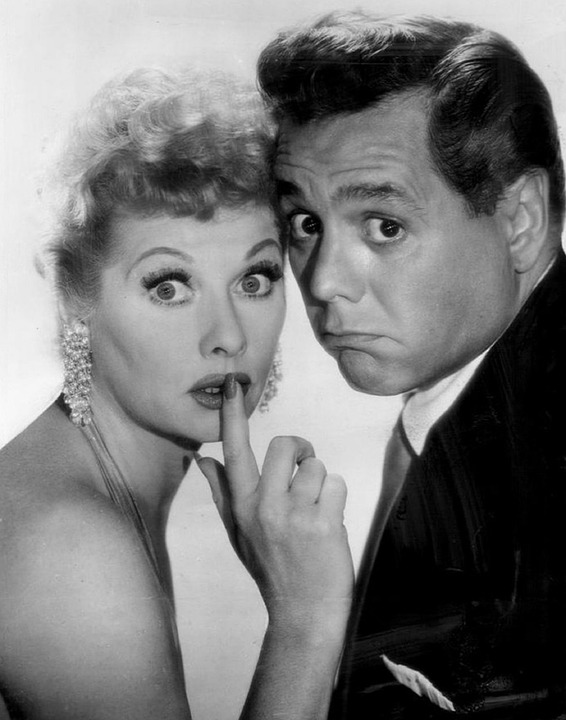 It’s a new month, dearest Germs, and you know what that that means: time for a new Old Hollywood article. For this month, though, we’re going to focus on something we’ve never featured before. This month, we present to you a classic TV show that has never been off the air since its debut in 1951. What is this special show, you ask? It’s one of the most beloved shows on the planet, with its star actress still known to this day as one of the Queens of Comedy. In fact, this show really needs no introduction, so without further ado, this is Old Hollywood Spotlight: I Love Lucy.

Before there was Ricky and Lucy Ricardo, there was Desi Arnaz and Lucille Ball. Desi and Lucy first met in 1940 and were married that same year. Each was a successful performer in their own right; Desi was a talented bandleader while Lucy was known as the “Queen of B movies.” But different careers meant that the couple had to spend enormous amounts of time apart, a factor that obviously put a great deal of strain on their marriage. But Lucy and Desi were dedicated to make it work, and when Lucy was offered the chance to star in a TV show, she knew it was the perfect opportunity for both her and Desi.

In 1950, CBS wanted to turn their hit radio show My Favorite Husband into a TV show. Since Lucy was co-starring in the broadcast, execs thought it would be a perfect choice to have Lucy reprise her housewife role on the small screen. But there was one catch: Lucy would only star in the show if Desi could play her husband. When Lucy told CBS her terms, they balked at the idea. According to execs, Lucy and Desi wouldn’t appear believable enough on the screen as a fictional married couple, regardless of the fact that they were married in real life. Determined to prove them wrong, Lucy and Desi created their own vaudeville show, touring and performing to sold-out crowds around the country. The audiences loved the act, and Lucy and Desi used that reaction to prove to CBS that they could succeed as a married couple on-screen. In fact, the vaudeville show was so popular that the writers of I Love Lucy decided to incorporate some of the routines into various episodes. To this day, some of the episodes incorporating the vaudeville routines, such as “The Audition,” are still considered by fans and critics to be some of the best episodes in the series.

Since its debut in 1951, I Love Lucy has never once gone off the air (thanks in part to the magic of reruns). Its popularity and timelessness has spawned a legion of fans all over the world, with each new generation discovering and adoring the hilarious antics of Lucy Ricardo. But what’s even more special is that the show transcends the barriers of time and continues to make people laugh and forget about their cares, no matter what decade they are living in. As audience members, we root for Lucy to overcome the odds, cheer for her whenever she succeeds, and sympathize with her when she can’t beat the situation. Even though the show is scripted in a formulaic way, it still feels real and authentic to audiences, so much so that Lucy Ricardo becomes more than just a character on TV; she becomes someone we welcome into our homes as a friend. And as long as we continue to have reruns, Lucy will continue to be welcomed into homes across the world for years and years to come.