Silence is golden, but audio is the huge pot of gold. Once audio and color were included in films, most silent stars were nowhere to be seen or heard of. For actress and director Mary Pickford, it was different. Her legacy in the film industry has been left behind for historians and Old Hollywood fanatics to observe without her having to say much at all. 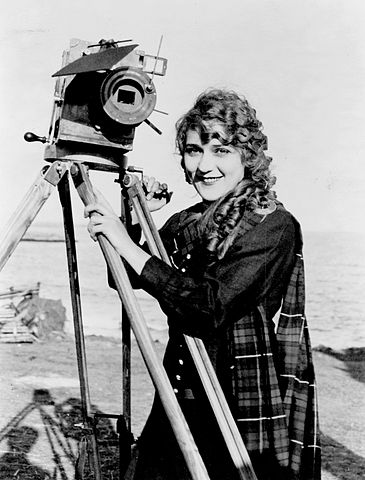 Before being known as Mary Pickford, she was born Gladys Louise Smith on April 8, 1892, in the city of Toronto in Ontario, Canada. At age 6, she began performing in theater to help support her family after her father left and died of a brain hemorrhage three years prior. Mirroring her family life, she played the role of a fatherless daughter in the melodrama The Silver King, and her early start in theater made her known as Baby Gladys.

The young actress toured in different shows and productions for nine years, and at age 15, she and her mother went to New York, where she made her Broadway debut in The Warrens of Virginia and used the stage name Mary Pickford. Pickford was her mother’s family name, and because she didn’t like her middle name Louise, she lied to producer David Belasco by telling him it was Mary. Thus, rising star Mary Pickford was about to become a screen icon.

Once The Warrens of Virginia production finished, Pickford entered the silent film business by working for the director and head of the American Biography Company, D. W. Griffith. At the time, most films were short, so Pickford appeared in more than 40 movies in 1909. When Griffith moved his company to California the following year, Pickford went with him.

At the time, movies were made without audio, with the exception of music. The actors had to exaggerate their facial expressions, and often a black slide with words briefly explained the plot and included dialogue. These were known as intertitles, and they helped viewers understand what was going on in the films.

Pickford’s roles were often those of young girls even when she was an adult. Her long curly hair, her beauty, and her charisma helped her become recognized as America’s Sweetheart of the silent pictures, causing her to become an international star.

Some of Pickford’s best films were the ones where she collaborated with her friend, writer and director Frances Marion. Rebecca of Sunnybrook Farm (1917) and Poor Little Rich Girl (1917) were two of their hits. In 1919, the actress worked behind the scenes, and she even founded the film company United Artists with Griffin, Charlie Chaplin, and Douglas Fairbanks, Sr. This production company is still in business to this day.

Pickford’s personal life included a marriage to actor Owen Moore, but she divorced him to marry her United Artists co-founder, Fairbanks, in 1920. At the time, stars were told not to be divorced because it would end their career. Pickford and Fairbanks, however, were the hottest Hollywood couple of their time, and they were adored by fans. They hosted parties at their Beverly Hills home, known as Pickfair, until they divorced in 1933.

The 1920s were successful career years for Pickford. She was in box office hits such as Polyanna (1920) and Little Lord Fauntleroy (1922), and in 1927, she helped found the Academy of Motion Picture Arts and Sciences.

During this time, the first “talkies” (films with audio) were being created and rising in popularity. It was in 1929 that Pickford starred in her first talkie, Coquette. Although she won an Academy Award for that film role, her movie success began to decline, like that of many silent stars, as audio became a phenomenon. Pickford’s last film was in 1933’s Secrets.

Although she retired as a movie star, Pickford continued to work behind the scenes as a producer, including the films One Rainy Afternoon (1936), Susie Steps Out (1946), and Sleep, My Love (1948).

Before the Screen Actors Guild was created, Pickford was the vice president of the Motion Picture Relief Fund. She led the Payroll Pledge Program, which deducted one half of one percent of those who made $200 a week to fund the Relief Fund.

Because she was “an early leader in the film preservation movement and an ardent supporter of creating a museum dedicated to the art of moviemaking,” Pickford was one of the founders of the Society of Motion Picture Producers in 1941. Later, “she was there with shovel in hand to break ground” for what would become the Motion Picture & Television Country House and Hospital.

In 1928, director Griffith described Mary Pickford: “She has tremendous driving power in her… and a most remarkable talent for self-appraisal. She never ‘kids’ herself. The thing that most attracted me the day I first saw her was the intelligence that shone in her face. I found she was thirsty for work and information. She could not be driven from the studio while work was going on. She was – and is – a sponge for experience.”

It doesn’t matter that audiences didn’t hear her voice for the majority of her career because Mary Pickford left visuals of herself both on-screen and behind the scenes to inspire historians and fans.