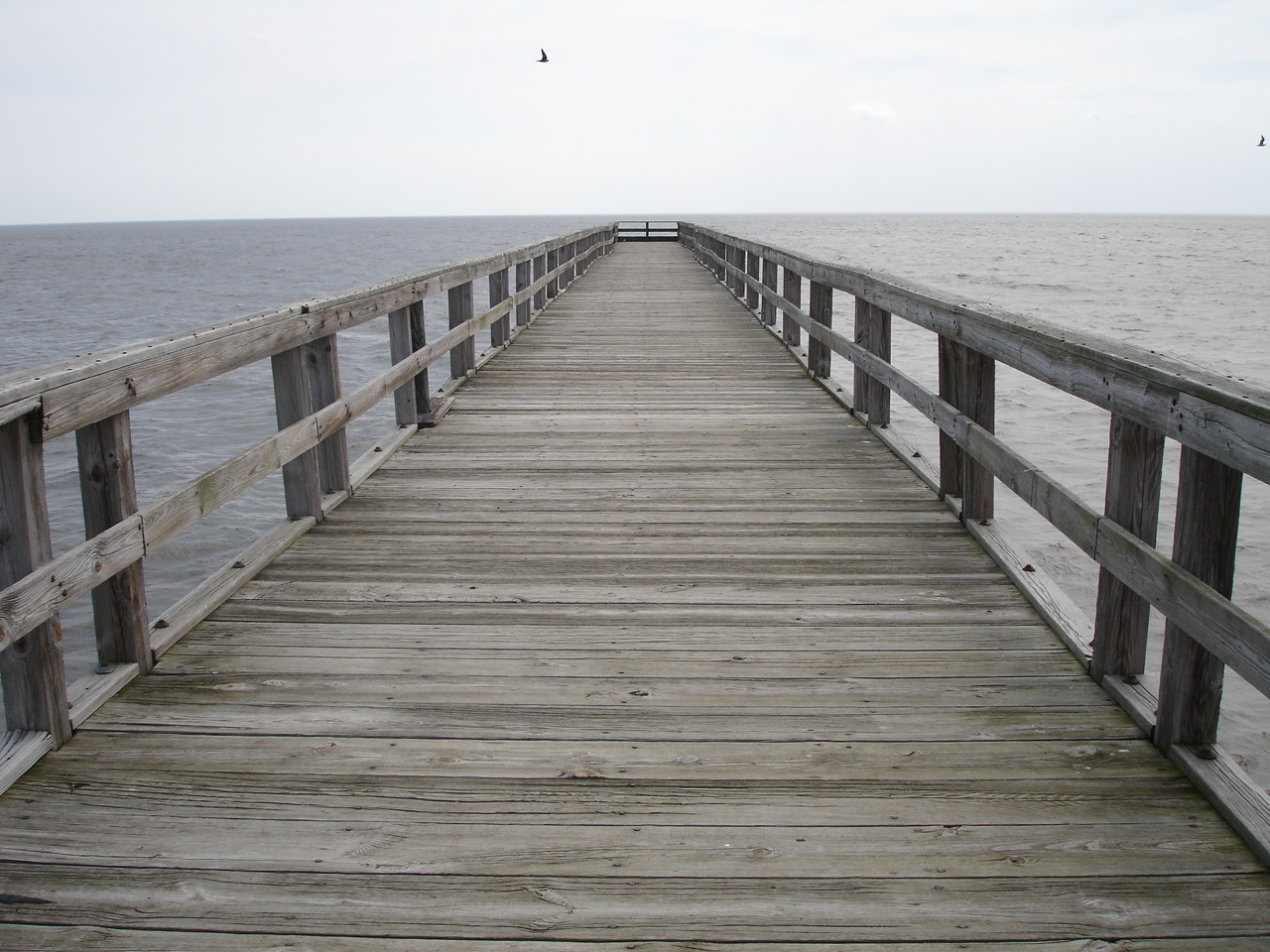 In a fog of worry, I attempt to start over.  I’ve got my hands in the hands of a little guy, nine years old.  The electric energy of youth eases my worry, but does not stop it.  This is Pete.  Pete’s mom and I are on fast forward to love, and it worries me.   Pete tells me to please, please, please let go of his hands and bait his hook. So I do. We stand at the end of a little dock in a little town at the bottom of Alabama on the bay.  Jeb comes out in his usual fashion, places a bucket at his feet, tosses out a line and lights a cigarette at the same time –a trick of incredible manipulation. Jeb has a raspy voice usually heard in movies about pirates. Pete suddenly screams, “Got one!” and we both stop what we are doing and watch Pete’s line.

Pete’s mom, Angela, and I bring Pete to the pier to fish often. Pete always has fun, always catches more than we do, and always wants my ‘secret’ candy bar that I bring in my back pocket for him.  Angela arrives after we have already set up and Pete is reeling in what looks to be a croaker. She had a doctor’s appointment and the pale yellow lines of worry at her eyes remind me that her chronic Leukemia is a serious thing.

“Reel that lil croaker in, buddy!” Jeb cries out to Pete.  Jeb rubs out his cigarette, and tosses in the empty bucket brought for that reason. At times, he’ll rinse it and bring a few fish home to his ailing wife, but mostly it is an easy target for cigarette butts.

Pete leans back and shoots the croaker over the pier railing, and onto the boards.  Jeb has already put his reel down and scoops the croaker up and effortlessly removes the hook. He tosses the little fish at Pete, who in that instant, empties his hands and catches the fish.

While Pete eyeballs the croaker, I lean to Angela.

“As usual, cryptic nonsense and psychobabble about my need for a counselor.”

Angela exhales loudly and exclaims, “I’m all better you son of a bitch!”

“What did you really say?” I watch Pete eyeball the fish.

“Mom, you aren’t supposed to cuss.”

“I know sweetie… Forgive me?”

This is our routine, going on five years now.

I am trying to figure Angela out, and as all men do, I fail at understanding the finer points of fascination, lust, bewilderment, compassion, empathy, and plain love.

“No, I am afraid that, as usual, the doctors want tests and tests take time and money. You just be you, and be good to Pete. That is all I ask.”

“Oh come on, there has to be something I can do?”

“Bait that man’s hook!” Angela goes in behind Pete and takes up the rod and reel, pointing it at me. She rests her chin on Pete’s shoulder and watches the croaker gasp. Pete steps forward and tosses him back.

“Good little Pete, throwin’ em back to fight another day.”

“Sure, but if I get a bigger one, he’s goin’ home to fry.” Pete starts laughing and Angela joins in. Her laugh is, without a doubt, the sexiest thing I have ever heard.

And the two of them giggle on like that until Pete does, in fact, hook a bigger croaker and they plan a meal.

“I want lemon on it!” Pete cries out. Jeb gives him a high five after the fish is on the pier. Jeb always high five’s Pete after a fish is brought in.  And Angela always fries his fish in a skillet with extra lemon.  And we have a glass of wine, and clink glasses.  And we smile at one another until Pete goes to bed. Then we meet again, suddenly just kids ourselves, and make love to light jazz, and attempt to enjoy our lives.

Just the same, Leukemia is rough. And I worry. And I often wonder how Angela does not worry more.

She says, “You are my safety net. If something happens to me, Pete has you.” To which I nod and smile. My assurance that I am a part of her world is a deep, and lovely, thing.

And bringing Pete into my world has been an experience of pure joy. Frustration too, sure, but oh the joy of that look in a boy’s eye when he has done something to please you, then realizes he has succeeded, and the smile that follows.  Pete now, for example, looks to me having released the fish and smiles while saying, “Fight another day, buddy!”   It almost brings tears to my eyes.

“Another one!” Pete screams, and as Jeb moves in closer, Debbie walks out to our end of the pier. Debbie claps and whistles and coughs out, “Fish on!” Debbie has given up smoking, but still sounds like she is the two-packs-a-day smoker she once was.

Debbie moves in helping Pete keep the line from tangling on the railing, and eases the line to the far end of the pier where Pete can stand and reel, unhindered.  Pete pulls up a croaker twice the size and holding the line, turns to Angela with hopeful eyes.

“Of course Pete. That is a big man making us dinner!” Angela squeezes my arm and pulls me into a sort of sideways hug. I squeeze back.

“Great job Pete! Threw the little guy back to go tell his grandpa to come back and see us!” I squeeze Angela and stop thinking about her illness for the longest 30 seconds of my life.

Jeb comes closer and all four of us circle Pete and the big ole croaker. We have become a circle of love. The Leukemia takes a back seat for the moment, and I am deeply moved. I high five Pete and help him with the hook and lower the reel to the boards. I high five Pete a second time, rare for me, but I exclaim, “little big man just caught us dinner!”

Angela gives me a high five, also rare, and we look into each other’s eyes and know our love is true. Sick or not, we love one another, we love Pete, and we will muscle our way through this, to the very end.