I am a teenager. I live in a pseudo-democratic country where the citizens have all the rights possible and there’s supposed to be no discrimination whatsoever (except if you’re a feminist, a woman, someone belonging to a minority, or someone not heterosexual). Everyone here has a voice on the Internet. More often than not, one would be seen tweeting their remorse for a victim of sexual assault as opposed to helping out a victim of catcalling on the streets.

I go to a somewhat clichéd, kinda out-of-a-chick-flick high school. I have a group of people there I sometimes call “friends.” In reality, however, they are just a bunch of people who I discuss movies with and go out drinking with. We never talk about social issues, our dreams and aspirations, or what we believe in. They probably wouldn’t mind my absence either, but we regularly post selfies on Instagram and talk about who hates who. Most of my fellow students don’t even like what they study and curse their teachers behind their backs. Most of the teachers, in turn, consider us the human equivalents of cattle. We don’t know anything about paying taxes or basic banking procedures, but, hey, each one of us can cram an entire 200-paged textbook the night before an exam and get straight A’s even without understanding whatever we mugged up. Well, at least we secure the first ranks in the class, right?

Ever since I started living in a coeducational environment, I have seen girls being mocked at for having body/facial hair, drinking/not drinking, showing too much/too less of flesh, being too “masculine”/heavy/flat and having stretch marks. On the other hand, I have seen guys being ridiculed for supposedly looking too “effeminate” or acting too “gay” and believing in feminism along with being branded as a female genital organ that connotes a lack of courage. Remember that guy who made fun of you for wearing pink and that girl who bullies the transsexual kid every day? Yeah, both of them are feminists on their Facebook accounts. The other day a classmate of mine suggested that I’d look prettier with arched eyebrows and a waxed face. She couldn’t quite comprehend it when I told her how I’d rather not succumb to the very fixed standards of beauty by subjecting myself through inessential pain. Meanwhile, at the other end of the hall, a girl gets the weird eye for wearing a hijab. Got to love high school.

I have a thing for this one person I like a bit more than others. We talk sometimes, but I’m far too socially awkward for them, so I doubt anything is going to happen on that front in the near future. I try making small talk, but the opposite of love is apathy, and what greets me is an indifferent nod or an absentminded “mhmm.”

I like writing, and I’m kinda into art too. Or at least, I thought I was until my parents discarded my doodles as “a distraction from algebra.” Needless to say, the wall between me and my family has lately been increasing in magnitude by quite a large margin, and so I spend most of my time in my room, listening to music and reading e-books. I have tried keeping a journal on more than one occasion, but it somehow always ends up 80% empty. I have big dreams, but as of now, I have no clue about my college plans. My final exams start soon, and even though, contrary to popular belief, I care about my academics and want to make my parents proud, I can’t seem to stop procrastinating. I’m trying, but Tumblr feels like a more interesting (and safer) alternative.

I am a teenager. All these things scare the living hell out of me, and I often get pretty sad when I see the bleak chances of change in the future. I feel helpless and frustrated, but then I realize that I possibly couldn’t be the only one in this population of 7 billion — out of which a considerable proportion is that of people my age. I see a me in all of you out there and suddenly don’t feel like a loner anymore. I see a me in the guy who works at the Starbucks in the next block, working double shifts and handling high school as well, trying to save up enough for college. I see a me in the wealthy girl next door who has been told all her life how she must have everything easy and is expected to take charge of her family business she has no interest in as soon as she graduates. I see this phantom force binding us all together all across the globe.

I am a teenager. I’m not alone, and neither are you. I’m loved, and so are you. One fine day, I will change this world for the better, and so will you. 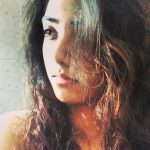 Manasvi Chauhan is currently in senior high, and she writes, reads, and binge-watches Grey’s Anatomy for a living. A true hopeless romantic at heart, she survives on chick flicks and Cecelia Ahern books. Her future plans include pursuing screenwriting along with plotting strategies for world domination.