Quotes are pretty things. They inspire, intrigue, build up courage, destroy apathy, and create desire. They are very pretty things, but being pretty never stopped a thing from being cruel.

A quote that always resonated with me was: “Some people put up walls to see who cares enough to tear them down.” This quote positively sung with my personality. I am occasionally a mean person, but more often than that I am a standoffish person, but no, I am most often of a reclusive type. Under the right circumstances, though, I am outgoing yet unempathetic, and I am always logically unemotional. So I am, right? No, honestly, I am an unfloundering romantic, an unrealistic dreamer, a closet poet, a courageous adventurer, and my heart breaks and soars as often as the tides rise and fall.

My whole life I had believed people just would inherently know this. They would know that I only pretend to be shy and cold. I believed that I would have friends because those who were meant to be my friends would not be intimidated by odd pride and self-dependence. My predestined friends would be able to push past my indifference and not be surprised by my unfailing giddiness for life. Even more than friends, though, I thought there would be a guy (because there is always a guy, right), and he, he, would see me for who I am and love me for how easily I love. He would not just accept my oddities, but love them because he loves all of me. He would shatter the walls around my heart so he could hold my soul, but not leave me defenseless — no, he would be my guard against the mocking world. He would protect me from its evil so that I wouldn’t have to hide away again. I would love him for it too. I would make him laugh, show him the world from a new beautiful perspective, always support him, and never mock him, never hurt him. When the world was bad to him, I would curse it. When it lied to him, I would whisper all that is true and lovely in his ear. When he felt weak, I would remind him of his heroics. I would love him entirely — as much as I love the sun. Without him, I would be still and dead as ice.

But you see, the world lies, and quotes lie, and hopes lie. I know this because, today, those walls still stand, and they’ve been there oh-so long. By now, ivy has crawled up the walls and blocked the window that my soul once used to hopefully look out at the world. Now it is dark and lonely, and I know nobody is coming to save me because that’s just not how it works. I feel like Rapunzel with a pixie cut — in other words, hopeless. I’m trapped behind these walls forever . 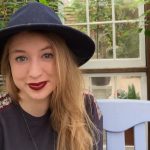 Lindsey Cole is from Iowa, and, with the exception of Iowa, has no idea where she will residing next year or for the rest of her existence. She is too finicky to have hobbies, but instead has passionate, short-lived obsessions that have included paintball, caffeinated anythings, fashion, the ukulele, drawing, and countless other multifarious pursuits. You ever meet her, it is quite possible she will introduce herself with a fake name and a fictitious backstory. The fraudulent identity will not result from maliciousness, but instead from boredom and the aforementioned caffeine.