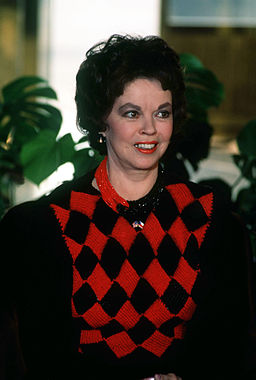 Born in  1929, Shirley Temple Black began acting at the age of three and became an immediate box office sensation. Many of her early films came out during the height of the Great Depression, and her wholesome, cheerful films provided an escape for many beleaguered Americans. Audiences adored her, and her films were making more money at the box office than many other famous adult stars of her day. She retired from film at the age of twenty-two, and it was following that critical career move that she entered the political arena, serving with the U.S. delegation to the United Nations in places like Ghana and Czechoslovakia from 1969 to 1992. In 1972, Shirley Temple Black was diagnosed with breast cancer and underwent a double mastectomy. Following the procedure and her subsequent recovery, she went on to speak publicly about her ordeal, becoming one of the first female public figureheads to do so concerning breast cancer.

Shirley Temple Black is mostly remembered for being the precocious triple-threat child actress with a head full of blond curls, but it is important to remember her for her incredible achievements as both a grown woman and as a political figure. Not only was she a remarkable young talent, she was also a dedicated humanitarian who served her nation for over twenty years.