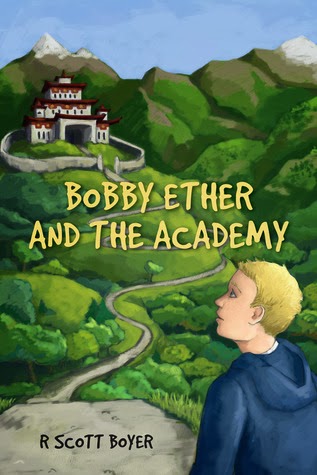 Hey, Germs! I usually find out about the books I read on my Kindle just by browsing Amazon and Smashwords.  I read through the description and then look at some of the high reviews and low reviews.  If there aren’t reviews and the book is free, I might get it anyway.

Bobby Ether and the Academy was brought to my attention in a different way.  Jennifer Niven contacted me and gave me R Scott Boyer’s email in case I wanted to review it.  After hearing that it was “kind of like Harry Potter,” I was definitely willing to give it a chance.  We exchanged a few emails, and he was kind enough to send me a signed copy!

Bobby Ether and the Academy

Bobby Ether and the Academy starts with the main character, Bobby, making an impossible shot in a basketball game.  From there, he meets a mysterious woman named Cassandra and her two acquaintances, Simpkins and Hayward.  Bobby journeys with Cassandra while she tells him about  “The Academy”, but between the overload of information and other extenuating circumstances, Bobby runs away from her, which results in tragedy.  In the aftermath of that, Bobby is taken to the Academy.  Life there is very different than what he is used to; it’s very spiritual.  He struggles with learning how to control his powers, but he seems to be blocked.

What I liked about this book was how different it was.  I loved that it incorporated Eastern religions and melded them with urban fantasy and a bit of science fiction. I liked that all of the characters were unique and believable for their ages.  Each person in the group was different.  Bobby specifically had flaws that were believable for a fourteen-year-old boy:  He was caught up in his huge range of emotions, yet he wasn’t sure how to handle all of them.

I liked all of the little plot twists here and there.  Some of them I saw coming while some of them were unexpected —  and I really enjoy being surprised by a book.

What I liked most was the ending: After a bit of falling action at the end, we were served up a HUGE cliffhanger with a giant sequel hook.  The ending itself was very well done. Major props to the author!

Sometimes I thought that the dialogue seemed a bit stilted.  It didn’t always flow naturally.

There were a few points that I thought Jinx’s (one of the main characters) super intelligence was a bit of a catch-all.  I felt that it sometimes made things too easy for the characters.  Tough problem to solve?  No worries, Jinx has it.  There were times that I just wanted to see them struggle a bit longer.

This book was a great adventure.  R Scott Boyer brings a fresh take to the “magical school” genre with twists and turns and an excellent hook at the end.  Needless to say, I can’t wait for the sequel.  If you’re looking for something similar to Harry Potter but still different enough to stand on its own, take a look at Bobby Ether and the Academy.

Has anyone out there read Bobby Ether?  If so, what did you think?