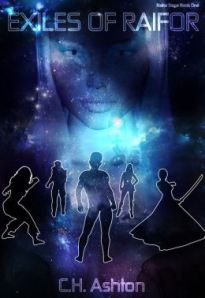 Hey, Germs! I found out about this novel, Exiles of Raifor by C.H. Ashton, a little differently than I usually do.  Soldelbarra on tumblr sent me fan mail one day, and we started talking about self-publishing  and about how we were both young authors.  He mentioned that his book would be on free promo in the next few days, and I mentioned that my first book was on free promo as well.  So, we got each other’s books, and after I finished that book, I moved on to Exiles of Raifor.

Exiles of Raifor follows the story of Bach-Ti the pirate queen, Aosen Yenra, Illoesten Rai Kenos, and Lanoel Rai Devroux among others. Each has their own story, but they get more and more intertwined as the novel progresses. Exiles takes place in a galaxy where war has just returned due to issues of succession for the Great Eternal Empire of Raifor. The world is rich with all the different races, the space battles, and the fantasy elements that strongly remind me of Star Wars, and there’s so much to take in. What’s even better is that all the different stories and all the different elements come together in the end.

One of the things I absolutely loved about Exiles of Raifor was the wide variety of characters.  Among the main characters, you have Bach-Ti the pirate queen, Aosen Yenra, Illoesten Rai Kenos, and Lanoel Rai Devroux.  We also get some insight on some other characters like Rhei Casha and Aress Viola. The characterization of all these characters, though, is very different.  Bach-Ti is brash (as you would expect of a space pirate) and cunning.  Aosen is determined to not be the hero.  Illoesten is calculating and cruel to her enemies.  Lanoel has her head in the clouds but has a good heart.  They are all VERY different from each other, and I LOVE that.  Even better, each character has growth throughout the series.

I also liked the Gundam influence that was going on.  In Exiles of Raifor, crusaders are humanoid battle armors, and they’re REALLY cool.  Rhei Casha also started reminding me of Ali al-Saachez from Gundam 00 about midway through the book.  When his personal crusader was red…well, I guess that’s more indicative of Char Aznable (Ali is a bit of a dark Char expy, though).

I also liked the mixing of science fiction and fantasy.  It’s something I like to toy with also, so its nice to see it executed so well.  The addition of aether and aether magi really sets Exiles apart from other science fiction novels.  I liked that there were different orders of magi and that they had different strengths and different weaknesses.  I like that magic and science have merged into things like Aethersteel.  It’s fun, interesting and reminds me of Star Wars at times (which is awesome because Star Wars was a big influence in my childhood).

This is going to sound like me nitpicking, but the martial arts side of me had a lot of trouble believing how quickly Lanoel grasped the basics of combat.  There are some interesting circumstances with her, and I’m not entirely sure how much time elapsed, but fighting is a tough thing, especially when gunfire and blades are mixed together.  But that’s just me and my martial arts realizing how hard fighting actually is.

There were a few “wall of text” parts that were a little difficult to handle.  That’s a bit more personal preference, though.  All writers get a bit guilty of “wall of text” every once and awhile.

Alright, as you can see, I had trouble picking out things that I actually dislike about this novel.  This is a fantastic debut novel.  I gave it 5/5 stars on Amazon.  Once I got into this novel, it sunk its claws in and dragged me along for the ride.  If you like Star Wars, the Gundam series, or just science fiction that takes place in space, I’m almost certain that you’ll enjoy Exiles of Raifor by C.H. Ashton.  I’m very excited for the sequel, Heroes of Raifor — which is out now!

Also, if you want to check out C.H. Ashton’s blog,  click here!

Has anyone out there read this book?  What did you think?