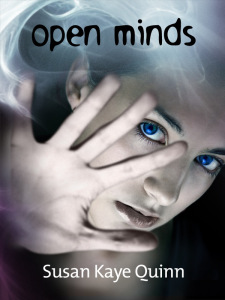 Hey, Germs! Open Minds by Susan Kaye Quinn was one of the first books that I grabbed off of Amazon for my Kindle.  I love me some good dystopian fiction, so it seemed like a great book to start off with.  Even better, it’s a book that’s usually free on Amazon.

Open Minds is about Kira Moore, a sixteen-year-old girl who lives in a world where almost everyone can read minds; but, she is a zero, a person who can’t read minds.  This makes her a bit of an outcast as zeroes aren’t to be trusted.  After an incident involving her best friend Raf (a normal reader), Kira finds out that she has a bit of a different power: the ability to “jack in” or control other people’s minds. Intrigue soon arises when a second boy, Simon, recognizes Kira’s power.  And from there…let’s just say things get a bit out of hand.  I don’t want to give spoilers!

I really loved the setting of this book.  I’m a huge fan of dystopian settings, and I especially liked that this had just enough changes that made Open Minds feel like it could happen. I really liked the concept as well.  I’ve never worked with mind readers before – I figured that it could get a bit…dicey — but Quinn executed the concept well  and added in something new!  Jackers were a breath of fresh air. They made the concept something new and interesting.

I also like that Quinn covered what the government might possibly do with something vitally different and potentially dangerous.  It’s something I’ve worked with as well, and it’s something I enjoy seeing in literature.

I also enjoyed that the characters acted like characters their age should (for the most part).  There were hissy fits about wanting to grow up, and some isolated themselves when they could have sought out help. It was great to see characters acting their age!

So…one of the things that I have to admit is that it took me a very, very long time to read this book.  Maybe it just took me longer than usual to get into this book. I don’t know. I found the story dragging a little bit at times.

While I liked how the characters acted for the most part, there were a few things that were a bit unbelievable for me.  There were plenty of mistakes on the main character’s part, but there were times that Kira’s actions seemed too…precise?  There’s a point where she’s traveling across the country by herself with the intention of not being noticed.  Even with her unique skills, I had trouble believing that she was able to accomplish this.

This is a great book.  I gave it a 4/5 on Amazon.  I haven’t written a full review on there yet, but I intend to!  There’s plenty of action, an engaging first person narrative, and an interesting and unique concept.  I would say that this book is good for about fourteen and up since there is some violence, some language, and some mentions of alcohol.  If you’re looking for a young adult dystopian sci-fi novel, look no further.  I highly recommend Open Minds by Susan Kaye Quinn.

Have you read this book?  What did you think? I’m interested to hear your opinions!