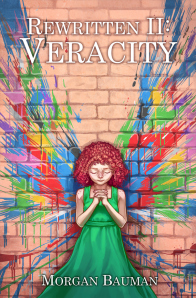 Hey, Germs! I’m back again with another indie book review, but this is a first for one of my reviews!  Morgan Bauman’s book Rewritten II: Veracity is a sequel (as the title indicates) to Rewritten I: Fallacy.

That being said,  if you haven’t read the first book, go read it; it’s amazing.  Then, read Veracity and come back to reread and comment on this article.  There may be spoilers for both books after this point, so tread with caution.

I’m going to let the Amazon description speak for me this time around:

“Lies protect Haven. There are only so many ways to hide – trickery and deceit are her only options. Each time she finds a new family, she knows it will only be a matter of time before she’s found out.

Only one truth has lasted throughout her life: There is no home for someone like her.

She’s running out of hiding places.

In the world of Rewritten, information is hoarded. Any false move or lapse of judgment could have dreadful ramifications. Each character has their own lies to tell and secrets to keep, and the struggle to cooperate despite drastic differences in their own perceptions of their world and situation sends every one of them into danger.”

There are a lot of things that I really liked about Veracity.  I like that the focus shifted to Haven in this book.  I also like that we saw places other than Phoenix or Ilonon; we really find out how expansive Qol is.  Of course, knowing how big Qol is and also knowing that Haven is running out of places to go is a bit of a heartbreaking spin.

I enjoyed seeing a few familiar faces from Fallacy. Besides Haven,  There were a few short appearances from Wylwon, Laenyn, and even Ray.  There were new characters as well, including Cyna, Coinith (shortened to Co), Ky, Miss Starr, and the list goes on.  Of the new faces, I think Co was my favorite.  I loved that everyone had weaknesses and strengths and that when they worked together, they were the strongest.  A true pack.

There’s also some really nice foreshadowing regarding one of the characters. I won’t spoil it, but it goes as far back as when you first meet them, so pay attention!

I really like that  Bauman’s new book created many new questions as well as answering old ones, but I think the biggest unanswered question is “What happens next?”

I flipped back and forth on Haven’s precociousness again.  Most of the time she toes the line of “grew up too fast” perfectly, but then there are times where she just seems too adult.  That’s just me, though, and it didn’t really bother me all that much.  It’s just some minor nitpicking more than anything.

There were a few points that I was confused about, and I didn’t understand what was going on – but I think that might have been due to how fast I was reading.

Really, there wasn’t much that I disliked about the novel.

Rewritten II: Veracity is an excellent follow-up to  Fallacy.  There are questions that are answered, and more questions are brought up.  At first I was concerned about such a young protagonist, but Haven proved to have an extremely interesting narrative.  I will warn you that this is a bit darker than Fallacy, but most series tend to get darker once you get further into them.  I would recommend this for people who enjoy fantasy with mystery mixed in.  It’s an extremely quick read, and you can find Veracity on Amazon for $2.99!  The rest of Bauman’s work can be found here.

Thanks for reading.  Has anyone out there read Veracity?  What did you think of it?