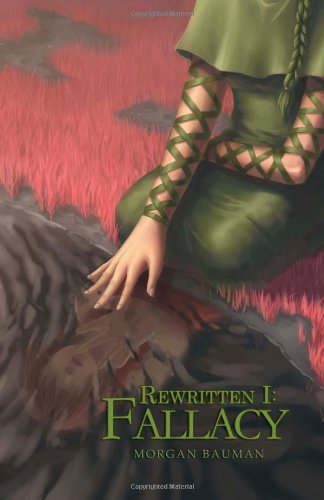 I love supporting independent authors– so when I spotted Rewritten 1: Fallacy by Morgan Bauman, I decided to give it a shot. What cemented my purchase of it was the description, so I figure I’ll share that.

“Born to the vivid heat and unyielding sunlight of Phoenix, Ray dives into her pool and surfaces in a cold lake. There is no sun in Qol. She has no family. Ray has never existed–only Laenyn. Or so the mad scientist claims. But her younger sister, older and yet smaller than she ought to be, seems to remember their life rather differently… In the world of Rewritten, information is hoarded. Any false move or lapse of judgment could have dreadful ramifications. Each character has their own lies to tell and secrets to keep, and the struggle to cooperate despite drastic differences in their own perceptions of their world and situation sends every one of them into danger.”

That managed to hook me.

There was a lot I absolutely loved about Fallacy. I really enjoyed the color system and the fabric system; it gives a unique atmosphere to the books. It really was a different world in the books, and Bauman succeeded in making a world entirely unlike our own. Qol has that interesting caste system, people who essentially secrete the colors associated with them– the grass is red, there’s poisonous mist that comes from the lake, and monsters that attack the cities. Bauman really jam packs the novel full of details and information – but not in an overwhelming way. The information is slowly given to the reader.

Another thing I liked was the characters. While there are only female characters (read the book to find out why!), we have a very diverse cast. Ray, who is ten years old, is our main character.  She is described as very angry to start, but that fades away more to a general confusion and frustration with her situation– which is entirely understandable and exactly how most ten-year-olds would react. Laenyn is our other main character; she is twenty years old, extremely duty driven, and rule bound. There is a bit of mystery surrounding both of them, which is great. We also have Haven, who is Ray’s younger sister and Laenyn’s daughter– kind of. She’s six years old and seems to be quite clever and good at following the rules.

What I liked the most about this novel was how much it hooked me. Fallacy is a quick read, no questions there, but it seemed to go faster because I was invested in the story, and it had its claws firmly in. I was about 85% done when I realized that I wanted the sequel right then and there.

There were times that I thought both Ray and Haven were a little more precocious than was realistic. I flip-flopped on this a lot; sometimes I thought that kids were smarter than we give them credit for, and other times I thought that it was hard to believe that Ray was talking about prejudice so coherently. It wasn’t enough to pull me out of the novel, but it still makes me think.

I wish there had been a bit more explanation of what Jauge did– though I’m almost certain that will get answered in another novel.

That said, there really wasn’t much that I disliked.

Morgan Bauman’s Rewritten 1: Fallacy is an exciting young adult fantasy read. I would recommend it to all fans of the fantasy genre – especially ones who like a bit of mystery mixed in there. It’s a quick read that keeps you wanting more. It’s only $2.99 on Amazon— which really is a steal of a deal.  And, you can find the rest of their books here! I’ll be giving it 5/5 stars on Amazon. If you’ve read the book, let me know what you thought about it!  If you read the book and want to chat about it, shoot me an email at laura@germmagazine.com.