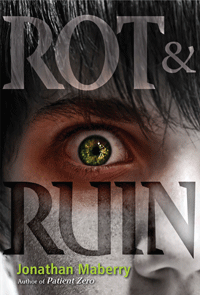 Good day, Germies! How are you all today? In the mood to chat about some zombies and two brothers on a quest that will re-define them and bring into question their own mortality?! Well then, you’re in luck!

Today we’re talking about Rot & Ruin by Jonathan Maberry, the first installment of a series of books about our main character, fifteen year-old Benny Imura.

This book takes place a few years after the (inevitable, let’s be real) zombie apocalypse in the settlement of Mountainside. Benny Imura is looking for a job so that he won’t lose his food rations, and he decides that following his older brother Tom, a zombie bounty hunter, out into the zombie wasteland dubbed the “Rot and Ruin” is the best way to do this. Naturally. The only problem with this (besides the obvious) is that Benny hates Tom. To be fair, Benny doesn’t even know Tom, so when he does get to know him through their journey out into the Rot and Ruin, his feelings change. He realizes that things are not always the way they seem, especially when it comes to bounty hunters.

One in particular is a pedophilic, sexist albino (no, really) called Charlie Pink-Eye. So, Charlie is involved in something in the Rot and Ruin called ‘Gameland’ where they send helpless victims of the apocalypse to battle for their lives with zombies, usually equipped with little more than a crow bar. Before going out into the Rot and Ruin, Gameland was just a rumor to Benny, and Charlie was something of a hero, known for fiercely protecting himself and the people of Mountainside by brutally attacking zombies. This image of his so-called ‘hero’ changes when Charlie kidnaps Benny’s childhood sweetheart, Nix, and heads straight to Gameland with her.

Tom and Benny, along with the help of a feral zombie hunter called “The Lost Girl,” track down the corrupt group of bounty hunters traveling with Charlie Pink-Eye and, I don’t want to spoil anything for you, but they raise a whole lot of hell.

The best part of this book is how heavily it focuses on the sibling relationship. I have two younger brothers, and I know what it’s like to have an opinion of them that may not necessarily be true. Even though I’m not a fifteen-year-old boy, I found that I was still able to relate to Benny’s original opinion of Tom. There is an amazing example of the change in their relationship towards the end of the book when Benny has no choice but to trust Tom, and he asks his brother how he can trust him to keep his word. Tom’s response is simple and poignant, “Because you know what my word’s worth.” In this simple declaration, it’s obvious to both brothers that things have changed between them for the better, even if getting to that point meant wading through a world full of the walking dead and the corrupt living, who oftentimes turned out to be where the real danger was.

What do you all think? Will you be picking up this book? If you already have, what did you think? And will you be reading the sequel? I think I could go either way. I’m not overly curious to find out where the next novel will take us, but I wouldn’t mind hopping back into the fictional zombie-infested world with these characters. And Tom. Especially Tom.

That’s all for now, my dears! Until next time!