He was an array of loosely fitted mirror slices, cutting and cold and exact like art, or the remains art made you leave behind. Sometimes you remember dust swirling, flaking to the grimy classroom floor like rose-shaped snowflakes. He’s tracing a heart with the tip of his foot around and between your ankles, catching petals in his hands, blowing them in your face: left-ear whispers on your tongue, kiss-me-not wrapped in purple scarves, faces flush, lips awake. “Wax poetic to me.” A breath, and then it’s your turn.

“I want the sun and the earth and everything in between.” The blood is rushing to his eyes in a heartbeat. They are sweaty because something is broken in him, in you.

Joyriding at the devil’s hour because you can. The light that drips off the stars melts you both some more. He’s glassy, but white spots take turns waltzing over his face. Everything is bright and belongs to the anthem that blasts from the offbeat radio. ‘Cause we are living in a material world and I am a material girl…’

Words are glued to the rearview mirror. The ones you need the most are gone. Stuck somewhere far away. Why must there be music to fill the space between you?

Drift. Numb. It’s numbing. You’re nodding because he is. He’s beautiful. They’re beautiful, the words he cannot bear to say.

His hand is flying across your vision. It’s landing somewhere, touching something you can never reach. Burning. You’re burning.

“Love isn’t something you can just talk about.”

When you remembered the ones he specifically pointed out to you, your breaths quickened. They were sharp, maybe bullets. But the wounds sealed. You started over again.

Their faiths are stolen and blue-green beasts that smear devil creams on bellies, staccato sonatas that quiver and snap, clap, fingers slicing air…

They’re breathless. Say it, you thought, and you’ll believe it. Breathless. Effortless. You could see them, those blue-green beasts. You could almost feel them.

Slipping. That’s what this was. Not falling. Just slipping. “What do you think it means?” His voice was tired.

“Maybe it’s supposed to be like that feeling you get when you drink water after chewing gum.”

“I’m sorry.” The words hung unanswered in the parts of him that spun so fast. “I’m trying.”

“I know.” His arms were wrapping around you like crepe paper, like you were the gift no one wanted.

In the space he left behind, you tried, time and time again, and you wavered. What if he lived in an ivory tower? He said poems were slices of truth, but all you could see were slices of lumped letters, minced pork that wasn’t cut right.

Words aren’t what they used to be. Nowadays, your breaths span as long as the hallways you once traversed. Without him, you are boneless. Bloodless. Sometimes you pray for the day you’ll lust over the less of him, the more of you. 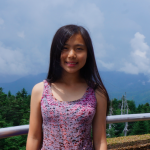 Katherine Du is a sophomore at Greenwich Academy. She writes a column for the Darien Times, edits for Polyphony H.S., and interns for the Greenwich Free Press and the Blueshift Journal. I have been recognized by Scholastic and published by Teen Ink and Eunoia Review.

Cassoday Harder is a twenty-year-old photographer inspired by youth, femininity, and summer. View more of her work on Flickr or visit her website.