When I was younger, I went to the park by my house quite often with my mother and sister. It’s a very largepark, and from the street one can see the immense grassy area covered with trees as well as the large pond overrun by ducks and geese.

The part of this park that makes me nostalgic, however, is not visible to one who is merely passing by. One must go around the pond and walk for quite a ways through all the trees in order to reach it. My mother, sister, and I would ride our bikes some mornings through the different dirt pathways, but we would always end up at the other side of the park – the side with the playground enclosed by a high blue fence.

It was not the playground, though, that would get me excited. It was the castle. At the top of the hill, the castle made up part of the barrier to the playground– but the moment I stepped inside, I was no longer in a park. That castle transformed me into a damsel in distress or, depending on the day, a princess overlooking her kingdom. I would go on my tiptoes to look through the different windows, viewing the different trees and paths I had just come from. I would then look the other way at the rest of the playground, surveying the ship, the wall carved into a wave, and the winding paths leading to areas with picnic tables and amphitheaters. 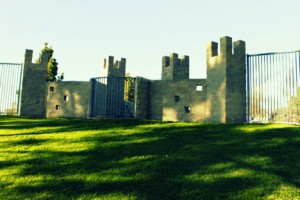 Now that I’m older – and now that I’m 5’9″– the castle doesn’t seem as large as it once used to, but my memories nostalgically remind me how it would tower over me from the top of the hill. To this day, it still looks out at the rest of the playground from its high point on the hill, and I still get excited when I see it because of the fond memories that I attribute to it. So, the next time you drive by a park, imagine what’s beyond what you can see; wonder what the trees are hiding from your view. You never know what you’ll wander across once you determine to join us in the Wander Project.