If you’re reading this, you’re probably aware that (*spoiler*) Santa Claus is not real. If this was news to you, I apologize and suggest that you sit down and have a talk with your parents (and ask them about the Tooth Fairy while you’re at it). All that aside, what you may not know is that the Santa legend was in fact inspired 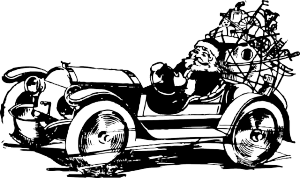 by a real person.

Santa Claus finds his origins dating all the way back to 280 AD, where a monk named Nicholas was believed to have been born in a town called Patara, in what is modern day Turkey. He was regarded as a saint by his countrymen and well loved for his charity and piety. He eventually became an extraordinarily popular saint, leading to the anniversary of his death on December 6th being regarded as a sort of holiday. Even after the Protestant Reformation — when the worship of saints was discouraged — he remained very popular.

One of the most famous stories surrounding St. Nicholas is about him rescuing three girls from slavery in the town of Myra, where he served as Bishop. The legend goes that there was a rich man (a.k.a. The Worst Father of the Year) with three daughters who had lost his fortune and was now destitute. Now, his daughters, who were very beautiful, all had young men that they were in love with, but they had no money for a dowry and, therefore, could not be married.

As time went on, the family grew increasingly poor, so the father decided that the only way they were going to keep afloat was, naturally, to sell one of the daughters into slavery (thanks, Dad). Bishop Nicholas caught wind of this man’s plan and quickly hatched a scheme of his own to prevent this awful injustice from occurring.

In the dead of night, Nicholas crept to the man’s house and spied the daughters’ stockings hanging outside on the line to dry. Into the oldest daughter’s stocking, he tipped a generous sum of money — enough to pay for the girl’s dowry so that she could get married and be saved from her dad’s horrific parenting.

The next morning, the family discovered the gift and was overjoyed. The oldest daughter quickly used the money to get married, and soon she was moved out of the house with her new family. However, the father’s financial problems persisted, and, instead of searching for, say, another solution, he began to plot to sell the second oldest daughter in order to bring in some extra money.

Nicholas heard of this plan, too, and so, in the dead of night, he placed a dowry-sized sum into the second oldest daughter’s stocking, which she used to get married right away. Once the second daughter was moved out, the father looked to his youngest and decided that he might as well try and sell her, too. By this time, of course, the father expected a sum of money to be anonymously dropped into his remaining daughter’s stocking, so he waited up one night in order to catch their benefactor in the act.

When Nicholas came to deliver his anonymous gift, the father jumped out to confront him. He quickly fell to his knees in horror, though, once he realized it was his bishop. He pleaded with Nicholas to forgive his wickedness, and Nicholas did. However, he made him swear to tell nobody of his generosity because he was very humble and didn’t want any credit for the good he had done.

Obviously, the father was just as terrible of a secret keeper as he was a parent because this story got around and I’m writing about it on my laptop in 2014. Regardless, this story captures the generous spirit of giving during the Christmas season, and it explains the origins of placing gifts in stockings by the fire on Christmas Eve.

This popularity endured through Dutch immigrants bringing their customs of celebrating St. Nicholas (or Sinter Klaas) to New York, where the idea of “Santa” was formed and shaped into something similar to what we know today.

The look and complete westernized mythos of “Santa Claus” came in the form of the now famous poem by Clement Mark Moore, “A Visit from St. Nicholas,” or, as we know it, “The Night Before Christmas.” In this poem, the idea of a fat, “jolly old elf” with rosy cheeks and a sled with flying reindeer was first presented, and the idea was subsequently solidified in the popular imagination.

This combination of truth, myth, and poetry created the red-suit wearing, bag-toting, North Pole resident we all know and love — even after our parents tell us that they were really the ones who gave us that NSYNC album for that Christmas in ’98.

All across the world, different cultures and peoples have similar legends and traditions of fey, gift-giving figures, from the Scandinavian Tomten to the Russian Babouscha. The idea of anonymous gifting on Christmas has endured, and we ultimately have Nicholas — the kind, humble, Turkish monk — to thank for that.