From the other side of the table,
a father told his daughter
to “save herself.”

Her head bobbed up and down
in quick submission, and she didn’t think
to ask, “what for?”

Now she crouches over her childhood
Bible, hands gripping the edges while
she squints through the window

above her head and wonders.
Her ears strain for the sounds
she has been saved from—

the rhythm of rain, wild laughter,
the patter of footsteps flying
into the uncharted evening—

beneath the pages that crinkle
under her fingertips, echoing
through her father’s house. 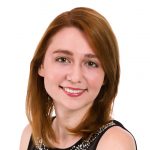 Amy Lauren Jones is a graduate music major at Mississippi College, a Christian university in the Jackson metro area. In 2013, 2014, and 2016, her poetry appeared in their annual literary magazine. She was also the first woman to receive the university’s Byrd Preaching Award, and she writes weekly for The Odyssey. Other recent publications include forthcoming issues of Lavender Review and Vagabond City. Although Amy hopes to pursue a doctorate in music, she still loves to write and study poetry.