Mirror, Mirror, on the wall,

Who’s the fairest of them all?

Snow White was the first Disney animated feature film, and as fairytales have become popular again, she’s become one of the major fairytales being retold, from Mirror, Mirror to Snow White and the Huntsman to Once Upon a Time. There’s something magical about Snow White.

A queen sews in her tower. She pricks her finger on a needle, sees the blood on the snow, and wishes for a child. The queen dies, and a new stepmother marries the king. The new queen becomes more powerful and vain, signified by her magic mirror, which tells her that she is the fairest of all until the day that Snow White overshadows her. Snow White is chased out into the woods, almost murdered, and the murder attempts do not stop until Snow White eats her stepmother’s apple and falls fast asleep. In the original Grimm telling, the prince falls in love with Snow at first sight and takes her coffin with him– in the transition, the apple is dislodged from Snow White’s throat. They marry, and the evil stepmother dances herself to death on red-hot shoes at their wedding, 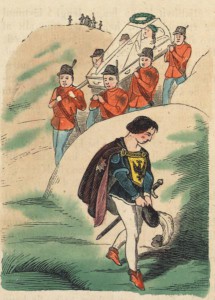 It’s not quite the Disney version that you’d remember, but Disney sanitizes fairytales to make them more acceptable for a modern audience. Tangled wouldn’t be quite the same if the princess got pregnant before marriage and the prince had his eyes scratched out. Each retelling tells the story for a different audience. Disney boiled down the murder attempts to the apple while Grimm’s version has three personal murder attempts. The Evil Queen strangles Snow White with a lace for her corset, a poisoned comb in her hair, and finally an apple.

Snow White, from the beginning, is unnaturally perfect. Her mother wishes for a child with “skin as white as snow, lips as red as blood, and hair as black as ebony wood.” This draws upon symbolism of maid, mother, and crone – white for maid, red for mother, and black for crone.  This transformation cycle of white-red-black can be read as foreshadowing of Snow White’s future life. The snow is for purity, the red is for sexuality, and the black is for her death. Once Snow White becomes old enough to be seen as fair, she becomes a threat to her stepmother’s reign, and must be disposed of. The Queen’s power comes from her looks and her magic, and when the one fails her, she turns to the other; and, in the finale, she dances to death on red hot shoes, symbolic of her own creativity and drive to remain sexual, the fairest and most beautiful of them all.

Snow White’s perfection is not merely a matter of unity of symbolism, however. Snow White is perfect because she incarnates the image of the “angel of the house.” Sandra M. Gilbert and Susan Gubar discuss Snow White in the first chapter of The Madwoman in 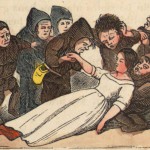 the Attic. They describe an ideal woman common in Western literature: passive, pure, selfless. Snow White fulfills this archetype in her experiences with men. The huntsman spares her because of her innocence, she stays with the dwarves because she is domestic, and the prince loves her because she is beautiful. The dwarves tell her three times not to let anyone in, but it is her disobedience that leads to her demise. She’s a daughter of Eve as the Queen is a daughter of Eve, but the apple sticks in Snow White’s throat.

Snow White is magical because the dynamics of the fairytale are cleanly cut. The repetition of red, white, and black colors the scene, and the opposition of young versus old is something everyone can understand. It’s the circle of life. Snow White replaces her mother, but the Queen will not be replaced. Snow White is powerful because it taps into struggles that continue today. Women are taught from infancy to associate beauty with femininity. And when beauty is gone, what is left?

Stay tuned, for I intend to continue this fairytale with an article on the Evil Queen.