after a photo triptych by Agafia Polynchuk

It is a slice, but not

sauce and cheese and toppings.

Rather, it is nutty bread slathered

gripped in her petite right hand

not even painted sheer. In this and the next:

her eyes are cropped out.

She crams the portion in-

to a cupid’s bow, a glossy cerise

red mouth. From the side, the slice must collide

with teeth but in the frame teeth are hidden

by the hearty bite.

It is not the food the viewer devours:

a flowery ivory blouse whose

neckline blooms into a tulip-petaled necklace,

a buckshot of brown buttons down the bodice

to her left as if this was a demonstration or show.

For the benefit of whom? Are we the apple

The witch? In which role or none

Her disappearance a presence of hunger

long after.  The viewer can hear

the mmm. Also, the hmm. On the plate 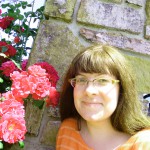 Melanie Faith holds an MFA from Queens University of Charlotte, NC. Her writing has been nominated three times for the Pushcart Prize. She is a writing tutor at a college preparatory high school in rural Pennsylvania and an online creative writing instructor. Her WWII-themed poetry chapbook, Catching the Send-off Train, was published by Wordrunner eChapbooks as their summer 2013 selection. Her poems, essays, and fiction have been published in the past year at Vermillion Literary Project, Linden Avenue, Aldrich Press, The New Writer, Foliate Oak, Origami Poems Project, Star 82 Review, and Words Dance. She’s written two children’s picture books in 2013.

Agafia Polynchuk is a Berlin based photo artist. She was born in 1988 in Leningrad. In 2010 she bought her SX-70 camera and took her very first polaroid picture. She can’t stop to taking polaroids ever since. Agafia is inspired by nature, classical works, and everyday things. She visualizes her thoughts, feelings and memories through self-portraits. Visit her online at Flickr and Facebook.