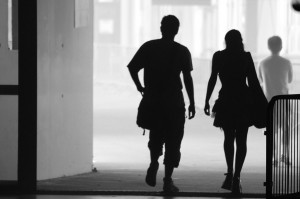 Recently in the news there have been multiple allegations of domestic violence against NFL players. Among the accused are Johnathon Dwyer of the Arizona Cardinals, Adrian Peterson of the Minnesota Vikings, and Greg Hardy of the Carolina Panthers. These aren’t the first instances of domestic violence in the NFL; Ray Rice is still indefinitely suspended for the accusations against him as well. Even if you’re not familiar with these men in the NFL, you’ve probably heard of the Chris Brown and Rihanna situation a few years back. The question I find myself asking is why do we live in a society that tends to sympathize with these perpetrators?

Any time a celebrity or professional athlete is accused of anything, they are often given a break or not held to the same standards as other “normal” people. Athletes are excused because people need them to play in a game; celebrities are excused because they have such a large fan base that can’t imagine them in any negative light. It’s important to never reinforce these notions. Any sort of domestic violence is unacceptable.

The problem for many victims of domestic violence is that they are often manipulated into thinking that their abuse is something they deserve — that they’ve egged on their attacker and should be apologetic. Often times the attacker will apologize for the violent behavior and say it won’t happen again; but, it usually does. It’s hard for victims to escape this vicious cycle because it is dangerous or they don’t have anywhere to go. It’s important for victims to know that they are not alone and that they are not deserving of any physical, emotional, or sexual abuse.

It is important to not stand by if you know someone who is a victim of abuse, and if you have suffered abuse, you do not deserve it. There are varying resources across the nation that can help us intervene. Safe houses, police, community outreach programs, and counselors are all good resources to help an individual safely intervene. If you do hear a violent situation, it’s imperative that you intervene. Situations can be unsafe since they are often fueled with weapons or alcohol, so always bring backup or only get involved by contacting law enforcement. Most importantly, you should always be a reliable resource for someone who is experiencing or has experienced abuse. Let them know you are there to listen to them, support them, and get them the help that they need.

Your voice is the most important tool in helping yourself or someone else. Speak up.