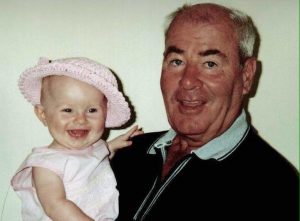 December 20, 2017, marked one year since my grandfather passed away.

The past year has been a journey of first denial, grief, then guilt, and forgiveness. I wanted to share this with all of you in the hopes that it will help some of you when you experience the same thing — because it will happen — and it WILL get better.

The denial of a loved one passing is extreme. Not to the point that you will see them everywhere and hallucinate and go to visit an empty bedroom, but it will seem surreal. The fact that they are here, and then, literally one second later, they’re gone. It’s almost too hard for the brain to comprehend.

I remember the second my mother told me he had died. I was lying in bed on my phone, a usual Tuesday morning during the holidays, when Mum and Dad opened my brother’s and my door at the same time with tear-streaked faces. Mum walked into my room, knowing I was closer to him than Sam and therefore would react the most. When she was a step away from my closed blinds drifting above the window sill, she muttered, “Pa died through the night last night.”

I will never forget those words. Even though it was later proved that he died in the morning, this one sentence will forever be imprinted on my mind. My first reaction? Saying “no” repeatedly and sitting up in my bed while listening to the full details and hugging my mother. For weeks, I kept forgetting he had passed. I would think of his image, and he would still seem so alive. I could remember every detail of his voice, his face, his laugh as if he was here with me. Even his funeral was surreal. I gave a speech about a man who I didn’t even consider being really gone.

In those few weeks, I would say, “When are we going to Granny and Pa’s?” in a conversation, knowing Pa would not be there but just representing my denial of the fact that he was now gone and that it would never be his house again. He has to be there. And we’d walk past his room to see my grandmother, and it would look the same — the same doona, same bed, same picture hanging up that once fell on his head — but no Pa. He really was gone. Which brings me to the next stage: grief.

The grief you will experience when a loved one dies is massive. It begins the day after you realize they have really left the earth. It hits you in a big way, as if somebody has just winded you by throwing a dodgeball at your stomach. This will go on for months. Or at least, for me it did. This part is the most pleasant. It is knowing they are gone and just grieving. Missing them. Missing someone may be painful, but it is not as bad as thinking you were the one who caused them to die, which brings me to my next stage: guilt.

But before that, some ways to minimise grief and help the pain simmer: Reflect on your loved one. Think about their life, and remember them as who they always were. Look at pictures, videos, anything, and savour the memories. Remember how much they loved you, and never doubt it. Cherish the memories, and only think of good parts of them.

This part is really hard for me to write. I felt like I was to blame for my grandfather’s death for a long time. This began on the day of his memorial at the nursing home. Mum and I went, and we sat there, ready to go. Being only a couple of months after his death, I was already emotional. I can’t remember the exact conversation, but it went something like this. I was saying how I wish we would’ve held off his radiation for a few months (he had cancer in his head and underwent radiation often, which wore him out to the day he went to sleep forever), and then Mum said something about the last time we saw Pa. The last time we saw him, he came to my presentation day. I had harped and harped for him and Granny to come, and when Mum finally said Pa would be able to make it, I was over the moon. He came. Towards the end, there were light refreshments in the library. This involved a short walk up a small hill to fill up on sandwiches and cakes for the prize-winners and families.

This may have been a short walk up a small hill, but for Pa, it was Mt. Everest. He stopped at least eight times during the walk to work up the energy to go again. Each time he stopped, I could feel all of the food being eaten, all of my friends talking, and everyone having fun without us due to Pa’s stops along the way. He told me to go. I stayed, until ¾ of the way there, and then I raced ahead. The food was already gone. I should’ve just gone back and walked with him, but I didn’t. And when he got to the library, to see me, he sat in a chair towards the edge of the library, watching me talk to everybody else in the room.

I even remember making a remark that I should go and talk to him, but I stayed with the people I was talking to. He was right there, and I ignored him. He came for me. I wanted him there. But I didn’t take advantage of that, and I didn’t make him feel that way. When it was time to leave, I rushed us again, wanting to meet my friends at the office so we could sign out together. I didn’t see any of them there. We were too late. Once again, I rushed him for nothing. I helped him into his car. I did his seat belt up (at least I did that part), and we watched him drive away.

Now I already felt bad for ignoring him a lot, but one thing never crossed my mind — not until my mother said it. We were sitting there, in that memorial service, and Mum said something about the presentation day. I said something like, “Yeah, but that wasn’t the reason he died — it was the radiation.” And Mum said, “It wouldn’t have helped.” Another sentence I can never forget.

It was right then and there that I took the full blame for my grandfather’s death. If I hadn’t invited him to my presentation day, he would have lived — at least until Christmas, which was 5 days later. We had also planned to spend all day Friday the 23rd with him, taking him out to lunch and an appointment. He didn’t make it; and, for so long, I thought it was because of me. There are two main routes for guilt here: thinking you are the cause for their death and feeling guilty for not spending as much time with them as possible while they were alive. I hit the nail on the head here with both.

To expand on the second route, I spent his last birthday a phone away from him too. I was invited to a maths study day that day — where no study was done, but I liked the people there and felt cool with them. So I ditched him on his last birthday. The rest of my family went out for a walk with him, and he loved it; this was months before he passed, so he was able to get around. I remember being on my friend’s balcony and speaking to him on the phone, wishing I was there because no outing with friends is all it’s cracked up to be when you’re actually there. Family wins every time. This year, he would have turned 80. I wish I was there when he turned 79. I wish I’d said “I love you” more often because it is always hard for me to get those words out; I almost said it every time I saw him, but I never did. I was always too awkward with that kind of thing, and so was he in a way. It was hard to say it, and I can’t remember the last time I did say it to him.

With his death came so many regrets and so many late nights where I would just lie in bed and cry over what a horrible person I was with wrong priorities and no way of being able to fix it. The thing about guilt is that you can’t go back and fix the past. There is no way to do undo the things you’re ashamed of. The only way to fix guilt is to overcome it and forgive yourself, which is the hardest thing in the world when it comes from within; no other person can do it for you. My grandfather can’t forgive me. He is gone, and that is why it was so hard to forgive myself, because I don’t have his blessing. This brings me to the final stage (so far), which is the most peaceful part. Forget what I said earlier about grief. Forgiveness is love. It is the end of a war with yourself.

It has been a long, hard journey to get to this point. Something that helped me get here is something unexpected: a dream I had. The only part I can remember is that Pa was there. I went over to him, and he hugged me, and he told me something. For the life of me, I can’t remember what he said, but I remember being so taken aback and so grateful for him saying it, as I was craving it. It was something like, “I am so proud of you,” or who knows, it may have even been “I forgive you.”

I strongly believe this dream was a symbol of him reaching out to me after a hard night of blaming myself. It’s like in jail when you’re allowed to make one phone call. Maybe he was allowed to send one message to me from above, and he decided that was his one message to me. He picked it well, I’ll tell you that much. I may have forgotten what he said, but I will never forget how it made me feel: forgiven, if you like. I felt at peace. I felt love from a man who was never supposed to shed love again.

For those of you struggling with this point: don’t worry. Even without the dream, I would have gotten there one day. After the dream, I still had nights where I blamed myself. Dreams don’t fix everything. You have to forgive yourself. And I can finally say that I have. It will get better, trust me. This is coming from someone who cried herself to sleep multiple nights because she did not think it was ever going to get better.

You will get over this, and you will be forgiven — by the person you lost and by yourself.