Three teenagers stood around Dad’s rust-eaten truck. All of them wore suits, as though heading to a prom. Two of them leaned against the truck bed and another, who was smoking, was at the passenger’s side window examining my brother’s booster seat or whatever was there. I checked the time, figuring the guys were part of Dad’s plan.

I was part of the plan, and my timing had to be precise. Dad was in the house prepping the kitchen to make his famous French toast, and I was headed to the corner store to buy the cinnamon he’d forgotten.

“It’s three of the same person,” Joey said. “They all said hello at the same time.” My brother was sitting in a small grassy area on the side of our house, looking for snakes.

“Go inside,” I told him. “Help Dad cut up the strawberries.”

Joey ran toward the side door, wiping his dirt-covered hands on the back of his jeans as I examined the wad of bills in my pocket. Dad used to make this French toast every Sunday, with fat slices of challah bread, honey, cream, and brown eggs. His recipe was exact, and the cinnamon had to go in at the right time.

Mom would take a bite and remember that a guy who could make such complex French toast couldn’t be all that irresponsible and inconsiderate—the words she’d used to describe him the day he left. Dad’s plan also involved filling the house with flowers, and I supposed it involved a few teenagers in suits.

When I checked my watch, a watch Dad had given me that kept perfect time, I realized I’d have to run. So I did. As soon as I arrived at the store, I told the clerk to direct me to the cinnamon. I put Dad’s cash on the counter and ran home without waiting for change. I was running so fast that I almost passed the uncovered garage where Dad’s old truck had been parked. My heels skidded on the gravel, and I felt like a cartoon. I imagined smoke coming from my feet, filling the air with a dark cloud as I stopped.

Mom’s car pulled up around the front, so I rushed inside, slid the cinnamon to Dad—who was waiting with thick pieces of bread lined up next to a milky orange mixture in a square bowl. He wiped imaginary sweat off his brow and said, “Good job, kiddo.”

“Hey, no worries,” he said. “I have my truck out back. Mom won’t see.” He dipped the first piece in the mixture, told me to count to ten. “Joey, boy, come on inside,” he called.

“Yeah, he came in, but I told him he could play in the back if he wanted.”

I looked toward the back window. I looked toward the other window that faced the alley. Dad was smiling, placing that first piece onto the hot skillet. A sugary, buttery sizzle filled the room as the front door closed; the soft taps of my mother’s heels moved across the hardwood floor. These details, small and beautiful, would haunt me later, remind me of the day my brother disappeared into the matrix.

I wanted my parents to be together more than I wanted anything, and Dad’s plan was working. I couldn’t interrupt, so I decided I would give myself two minutes to find my brother. I checked the time.

I ran around the house, called out casually so as not to raise suspicion. I ran outside and stood in the spot where the truck had been, and there was only a half-smoked cigarette and a wrapper from one of Joey’s suckers on the ground.

Two minutes were up. The time was right. I screamed as loud as any girl, screamed until my parents rushed out.

“Where’s my truck?” Dad asked. He was wearing an apron with a cartoon chef on it.

“It’s not the truck,” I said. How was I supposed to tell them about Joey? “There were men in suits. I thought they were part of your plan.” I was talking so fast that I didn’t even see Joey running down the alley with his fist out in front of him until Dad pointed. I heard his voice.

“Those men took your truck on a secret mission. They know you,” he said to Dad. “Then I caught this snake! I think they left him for me.”

Joey held out a green garden snake that whipped around like our cat’s tail when she gets angry. I realized I had been holding my breath and let it out.

The moment before we would have gone inside for the perfect French toast and to call the police about Dad’s missing truck, the ticking in my watch stopped. I held it to my ear, tapped it; it was 5:47, static. 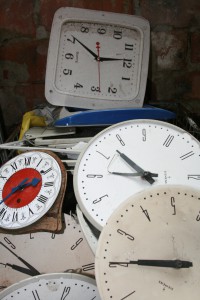 The snake slipped from Joey’s hands. As he knelt to reclaim it, squealing tires tattooed the alley. My parents and I watched, stuck in time, as Joey was rushed to the ground. The truck backed over him and took a sharp turn. The teenagers had tried to escape down our street, a dead end, and were still making their getaway. Dad ran after them, but they sped off; Mom dialed an ambulance.

We sat with Joey’s limp body. Dad reached for Mom’s hand. Their grip was tight, stronger than I’d ever seen. I looked at my watch, and I smelled French toast burning. I looked at my watch as my parents held on. It remained 5:47, but the numbers were already beginning to fade. 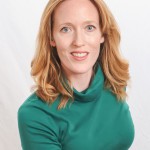 Jen Knox is a writer and teacher living in San Antonio, Texas. She is the author of Don’t Tease the Elephants, and some of her short work can be found in A cappella Zoo, Adirondack Review, Bombay Literary Magazine, Bound Off, Gargoyle, Istanbul Review, Narrative, Prick of the Spindle, and Superstition Review. Visit her online at www.jenknox.com.

Like a tea set on terracotta tiles by Katie Preedy

In the Teacup by Karina Murphy