Once upon a time there was a little girl who believed in happy endings.  She was an only child of two exceptional parents.  They told her she could be or do anything in the world she wanted to be or do, and she believed them.  She was the only grandchild on her father’s side.  Because of this, she had all the Barbies she could ever want.  From a very young age, she learned that she could walk into a room and people would love her.  She grew to expect it.  She learned to give it back.

When she was six months old she moved to Okinawa with her parents.  She grew up speaking and understanding Japanese as well as English for the first three years of her life.  They returned home to the States when she was almost four, possessed with a love for wide horizons, diversity in people and culture, and exploration and discovery that would stay with her all her life. 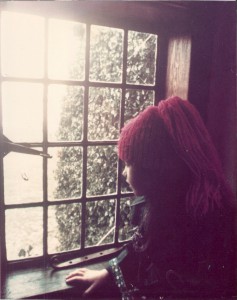 She was shy but she made friends easily.  She loved animals, especially cats.  When she stopped believing in Santa Claus (because the idea was too impractical), she still kept her faith in the Easter Bunny.  When she was seven, she asked her parents for Michael Jackson for Christmas.  She got a purple bike instead.

Neatness was not a strength of hers—she lived instead in a sort of cheerful chaos in a room full of books, records, clothes, posters, papers, stuffed animals, dolls, and general disarray.  She was once told that a messy room is a sign of creativity and she embraced that.

When she was nine, her parents moved her from Maryland to Indiana, where she was convinced her life would end.  She never felt at home there, in a land of cornfields and recreational vehicles, Trans-ams and tractors.  A place where girls her age had grown up on gymnastics and home perms.  At the age of nine, she began planning her escape, and her dreams—already promising to be big one day—became Big With a Vengeance.  She dreamed hard.  She dreamed strong.  She counted the days till she could leave.

And yet she also found a home there among the cornfields.  She wore red and white on spirit days and went to football games and cheered her high school basketball team when they came this close to winning State.  She found boys to like and a few boyfriends and one very best friend in all the world.  Each week she and her friends found the parties.  She fretted over who would take her to Homecoming or Prom, over who, if anyone, would ask her out.  She worried over her clothes and her hair and her classes and why the girls were sometimes mean when she only wanted them to like her.  She secretly wanted to be Homecoming Queen.

She was a good girl.  She believed in Happily Ever After.  Like her friends, she grew up in a time without war or metal detectors.  The economy was good.  The country was safe.  The town was safe.  Teenagers were free to come and go as they pleased.  Crime wasn’t a worry.  For most of them, the harsh realities of the outside world hadn’t yet set in.  When they got bored, they made their own fun.  It was almost idyllic.

In the second semester of senior year, her parents told her they would be separating, and the outside world—for the very first time—threatened to intrude.  They would stay together until she finished school, but she must not tell her friends what she was going through, what her parents were going through.  She must keep it to herself.  She worked extra hard to make her parents happy.  And from the outside, to her eyes, they did seem happy.  It continued to be the three of them—when her dad wasn’t busy with his work—just like it always had been.  She managed to convince herself that everything would be okay, that maybe they’d changed their minds.

Seven days after graduation, she and her mother moved to North Carolina.  The real world had arrived.  Innocence lost.  She was out of that town, just as she’d always dreamed, but not the way she’d dreamed.  She came back late in summer to visit her dad and for one last party.  She told her friends then about her parents.  Everyone seemed different—already looking toward college and other places.  Their time together in this town, in high school, had past.  Barn parties, bonfires, nights at Noble Romans, football games, dances—they had moved on from it and from each other.

She and her parents went their separate ways, too.  Her mother in North Carolina, picking up the pieces.  Her father in Indiana, in their old house, packing up her old room, throwing away her memories because she didn’t want them anymore.

She headed to college that fall to earn herself a wild reputation.  She ran around with boys.  She drank vodka straight from the bottle.  She nearly flunked out.  Her father called her mother and said, “You need to talk to her.”  Her mother said, “She’s your daughter.  You can talk to her as well as I can.”  He never did.

Interview with Amy Beashel, Author of ‘The Sky Is Mine’