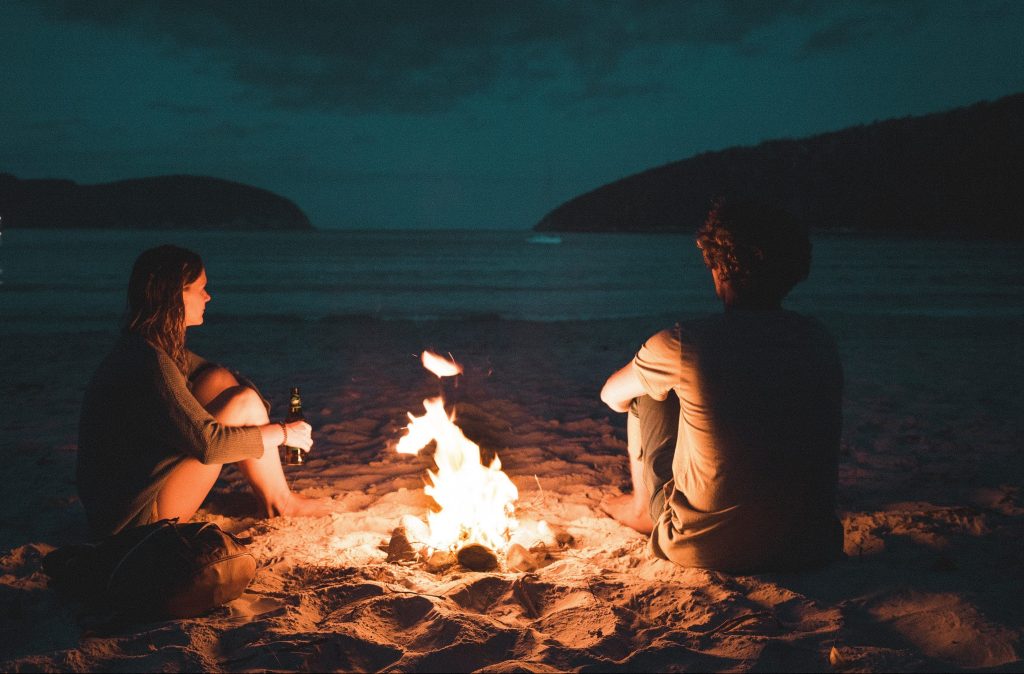 I strolled away from the throng of people dancing because my head was spinning faster than they were twirling. I had barely drank any beer, yet as I caught a look at him, my mind felt foggy and drunk. I had imagined this one scenario playing out in so many different ways over the years, and it terrified me that it was about to naturally unfold regardless of what I wanted. I felt my chest tighten and my feet twitch with irrational nerves; I was shaking. I pictured what I looked like through his hazel eyes: my tattered backpack slung over my shoulder, my hair a few shades lighter than the teenage girl he knew. My smile much wider than the day we broke up.

The all-consuming rush of infatuation, love, and lust we found with each other on this beach the summer before university was thankfully gone. We inevitably broke up, the might of the whirlwind storm we got caught up in tore us apart and left me devastated. Yet tonight we found ourselves at the same party on the same grainy beach in the same old spot as different people who hardly knew each other. He was quieter now. His hair had grown curlier, but the brightness in his hazel eyes when he glanced back at me was just as warm as ever. I sat down next to him, and he quickly embraced me in a warm, lingering way that defined a hug from Dylan. My body slotted into his like a lost puzzle piece, and my anxiety melted away. Over his shoulder I noticed a small fishing boat coming into the harbour. I sharply pulled away from him. His pupils were fraught with confusion until he saw it too. He cupped his legs to his chest, and I clutched my beer. The ghost of our relationship had ruined the moment. The glowing campfire in between us no longer felt comforting but a simple reminder of how distant and broken we were. The two earthy islands we used to explore marked a divide in our relationship. The smaller island by me was our past: bumpy yet settled. The island near Dylan, our future, was larger and stormier, yet the boat hovered near it.

We spent many lazy, summer days on that boat — a shared interest in fishing an obvious pretence that allowed us to borrow Mr. Foster’s boat for hours at a time. We used to take turns to row, and I teased Dylan, claiming I was the stronger rower. He retorted that we wouldn’t be romantically rowing without his family boat. While I rowed, he would intertwine his legs with mine and cover me in forehead kisses. While he rowed, I would massage his shoulders and kiss his neck. It was those little details that made my first experience of love so memorable that looking at that boat made my heart ache.

To fill the stale silence I stupidly asked, “So your Dad is still a fisherman, right?” as I fiddled with my charm bracelet that was hiding under my sleeve.

“Yes, Lucy, they still call him Fisherman Foster. Does it still bother you when your hair gets wet?” he said rhetorically with a rye smile

Before I could reply, my legs were wrapped around his torso as he dashed towards the azure sea, spinning me in circles. The waves lapped around my calves as he dipped me into the water, dampening the split ends of my hair. I splashed him with sea foam and ran into the ocean, barely noticing the boat charm he had once given me for my birthday falling. If I had heard that clink, maybe I would have taken it as a sign telling me that this night was merely closure. Looking back, maybe it was a sign that we were exes yet two acquaintances on the precipice on a new adventure together.