I still remember the day I found out I was going to get the chance to meet her.

It was a Tuesday, and I was in my local Waterstones just passing the time reading, looking at what books I wanted to buy next, even though they cost me an arm and a leg. Then on this plaque was a notice about a book event that was going to happen on Friday the 18th of November 2016, just six days before I turned twenty-two. I could not believe what I was reading. It read “Jennifer Niven and….(There was another lady, only I cannot remember her name) to be at Waterstones for a Q&A…” I thought my eyes were playing a trick on me. I’ve never had the best eye sight… or memory, come to think of it. But I rushed to the counter and asked the lady there to just confirm for me that I was not hallucinating, that what I read was true. And it was. I then bought a ticket for the event right on the spot. I was so excited when I left the store that day. I even had to call my mom and let her know I’d be late coming over for the weekend as there was something important I had to do. She was cool. (She lives in Stourbridge).

For days it was all I thought about. How I was going to meet one of my favourite writers ever, and how cool and calm I was going to be. How I would say all the right things and she would remember me more than anyone else she met in England. No such luck.

I was a basket case who was so nervous I ended up saying very little, and I acted the way a small child acted when meeting Santa for the first time. One girl bought her a cake that had the front cover of her new book on it. Another bought her a card. And I bought her, the woman I saw as my hero and role model…nothing. Even when I was given the chance to sign her book that she put out for all of us to sign, I just signed my name. WTF?

Meeting Jennifer Niven taught me something. You could be the coolest girl in the world, or you could be the biggest dork on the planet, and she accepts everyone. She was really nice to me, didn’t care what colour I was or that my accent was completely mixed up from between American, British, and Jamaican. I did manage to tell her how much her books meant to me, though. (Go me!!) She was not fake at all. I am the master at spotting fake, and she was as genuine as could be.

One day I hope to be just like her. But I can’t regret it at all. I now know that the best gift to give anyone who puts their work out there is to just show up, let them know you care about what they do — and that is worth so much more. I may never be able to shake off my introverted ways, no matter how old I get or how hard I try, but I will strive to be just like the woman who wrote two books I could place my life on. It was like her characters were my best friends. They understood my struggles.

So, thank you, Jennifer Niven, just for being real. 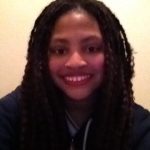 Aishae Hill is not very vocal, but if you give her a pen and paper, you will be amazed by how much she has to say. Jamaican by birth and British by nationality, she likes to write stories that complement all sides of her heritage. Carer by day and writer by night, her ambitions are to keep writing and to backpack through Australia soon. She hopes to contribute more writings to Germ Magazine in the future.

The Child Marriage Epidemic in Bangladesh