It’s summer, and you know what that means…swimsuit season! I know so many of us ladies dread this time of year because we are forced to face our bodies. The good thing is that — despite the endless barrage of barely-there pieces of material they call bikinis — there are a lot of options out there. But way back in the day, there weren’t many options for swimsuits. Most of them were made of heavy wool (it’s amazing women didn’t sink!) and covered most of a woman’s body. At one point, women were so concerned that their bathing dresses would float in the water that they had weights sewn into the lining! Could you imagine? 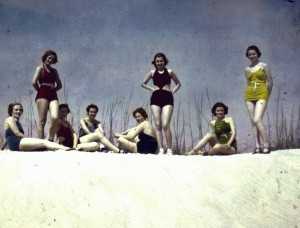 As we rolled into the Victorian era, society only became more modest. It was during this time that women had things that could only be compared to a mobile changing room. This enabled them to ride right into the water so that there would be minimal amounts of eyes on them. It’s not like there was really much to see, but even the slightest bit of skin or a body part like an ankle would have sent men into a tizzy! While I wouldn’t suggest being completely covered up, I’m sure you all would agree that some people need to re-learn modesty on the beach. These Victorian suits were made with the aforementioned wool, and while they didn’t do much for swimming, they also didn’t do much for the modesty they were trying to achieve! Once the wool was wet, it became like cling wrap; you could see every curve of the woman’s body. So much for discretion.

However, in the early 1900s, swimsuits began to adapt greatly due to a rebel named Annette Kellerman. In 1907, she was arrested in Massachusetts for wearing a one piece swimsuit that clung tight to her limbs and showed off a curvy figure. This led to the gradual shift in swimsuit hemlines. As we ushered in the 1920s, bathing suits and dresses began to reveal more of a woman’s body. These new suits were sleeveless and above the knee! Around the same time, elastic was being incorporated into the suit materials, and by the 1940s, the knitted wool suit had gone the way of the dinosaur.

We have now reached the largest swimsuit scandal…the dreaded bikini! The jury is out on who actually created the suit (which covered considerably more back then than it does today.) The creation of the bikini is credited to Louis Reard in 1946, but a man named Jacques Heim also released his version of the bikini the same year. In the United States, the creation of the bikini can be credited to the U.S. government, who approved the reduction of the size of a women’s swimsuit as a part of the war effort to save materials. Naturally, the midsection was the only socially acceptable place to reduce fabric. There were also swimsuits with mesh panels introduced around this time.  More body hugging fabrics like elastic and Lycra were starting to be used as well, which meant that more of the body’s silhouette was being featured.

As the societal conventions of modesty began to loosen over the next twenty to thirty years, the bikini became smaller and more flesh-bearing. In 1974, the thong bikini was introduced, though it took some time to catch on. Who would want to walk around with their butt literally hanging out? Bottoms also became higher cut to show off more of a woman’s leg line and to help avoid the dreaded tan lines. In the hyper sexual 1980s and 1990s, swimsuits were made for show more than function, which meant wacky cuts, materials like mesh, and thinner materials to allow for more even tans. There were some suits made that couldn’t even go in the water! In the past five to ten years, though, there has been a shift that includes the swimsuits of yesteryear. They have even evolved with us, and some fabrics now include things like sun protection, so you can get your tan on but keep your cancer away. One piece suits have made a comeback, and even the “retro” style bikini has returned. While there are still plenty of barely-there options, there are also plenty of options for those of us who like to keep it modest as well.

For more information, check out the sources used in this article:

A Quick Timeline of the Swimsuit Evolution

How to Personalize Drawstring Bags

Tips for Designing Your College Room