Beth waited until she could hear her mother sleeping, softly snoring on the other side of the wall. She sat up, fluidly, and slipped her shoes on, which were already placed at the foot of her bed.

She walked over to the window, light on her feet, crouching down and easing it open. She pushed on the edges of the window screen until it popped off. Beth looked back into her room once, then climbed out the window.

Her backyard was flooded by moonlight, the light reflecting off of a rusty swing set that her father had put together for her seventh birthday. She padded on the grass, walking on her heels, and crouched through a hole in the fence, the opening concealed by shrubbery. Beth had made that hole especially for nights like this.

Now on the street, Beth started to walk briskly, breaking into a trot once she was a few houses down, then a full-on run as she reached the tree line at the end of the road. She navigated through the trees, hopping over roots and ducking over low branches. The farther away she got, the more excited she felt.

The clearing where Beth always escaped to had been a children’s playground at some point in time. Everything out there was rusted metal, old carcasses that, surprisingly, still served their basic functions.

Beth sat on the merry-go-round and kicked the ground until it started spinning. She laid back, watching a starry sky spin and spin overhead. She closed her eyes.

When she climbed through the window on nights like this, Beth felt like she was leaving a part of her behind, peacefully asleep on the bed. She compartmentalized herself, and the Beth that climbed out the window is the most fundamental part of her — the one that doesn’t need to pretend, or act, or adjust. Out here, alone, she could just be.

When the merry-go-round stopped spinning, she reached into her backpack and pulled a book out at random: a collection of E. E. Cummings’ poems. She laughed out loud, rejoicing in the fact that she could pull out a poetry book without having anyone ask her what class it was for.

“Pleasure,” she thought. “This is for pleasure.”

She understood at times why people play this song and dance to its tune, being guarded — or worse, dishonest — about what they mean and who they are. Yet, there were moments like these when she was bewildered as to why people could behave untruly to who they were. What was the point? Why is a life conditioned by anyone other than the person living it? In moments like these, when she did exactly what she wanted for the sheer sake of wanting to do it, she couldn’t see why she would ever do something else.

She had this thought fleetingly when the sun was up, but at night, it was all she could think about. She was, of course, biased by love and idealism and wonder in the words of E. E. Cummings.

“I could run away,” Beth thought, “I could make this night last forever.”

She shut the book, letting this idea propel her back to her house. The sky was starting to turn pink and purple, the sun peeking out over the horizon.

What stopped her from planning an escape much larger than just this retreat that lasted a few hours every night? She could go off, run away to someplace where nobody knew her — a place where the person that she decided to be was always going to be herself, unencumbered by others.

She went in through the front door, that’s how bold she was feeling. Then she stopped. Her father was sitting at the kitchen, papers sprawled out in front of him. He looked at her for a moment.

“Well, this is new.” His face expanded into a smile. “You usually come in through the window.”

Beth bit her lip, thinking that if she stayed still enough, he’d just forget she was there.

“Sit down, honey.” He waved her over.

“How long have you known?” Beth asked, approaching him slowly.

“Since about the second time I had to fix that back fence.” He scratched at his stubble. “Scared me the first time I saw you running away, but I figured there were worse things you could be doing than just sitting around reading books.”

He was smiling brightly as he said this, unbothered.

“Don’t worry, darling,” he said, scribbling something in a big ledger. “We all need some alone time.”

Now, Beth just felt really stupid. She realized she needed this too — this part of her, who she was when she was around others.

She needed the lilt in her father’s voice when he called her darling. Her mother’s fingers in her hair as she cut it. The warmth in her chest when her friends laughed at something she’d say.

These nights alone, as special as they were, hadn’t been the only time she had been genuine. She realized she wasn’t just the Beth that climbed out the window at night. She was also a daughter and a friend, and these parts of her, while being different, fit together to form her.

“Don’t run off again,” her father told her. 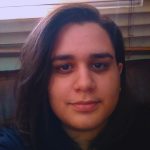 Martha Cabral doesn’t like talking about herself; she lets her characters do that for her. When she is not discovering who she is through her writing, she’s juggling her love for music, art, movies, and books. She’d like to use this space to recommend the sci-fi film Equals; let her know how you feel about it — or about her story — by tweeting her @MarthaCabral19.