My second-born sister is a mystery to me, but kind of like in that pig Latin way.

When she says something I don’t understand, I just try and switch the letters around and then I usually have it. Her words have always fallen on me from a world away, though she’s only three years older and here lately I’ve growed to where I can see over top of her head. I’m thinking specially of what she told me the day Bill carried her off to the courthouse in Wilson.

“You gotta dance with him what brung you, Gib.”

She was upstairs in our bedroom fussing at her hair for being contrary on her wedding day. Of all the days to not take a curl, she’d said to me, I think, or maybe to nobody in particular in that faraway voice of Mama’s.

I stood off to the side and watched as she tried to wrap fistfuls of wayward black strands around scraps of raw weave cotton, the ones Mama used to get from Mrs. Pollard at dressmaking time and save up till she had enough to sew dish rags (and the other kind of monthly rags that I will not mention because it is uncouth). I wanted to lift us up by saying something cute and grown-up, like: you know good and well rag rolling a head full of bone dry hair is a fool’s excursion! But standing there, watching as clump after clump fell back into a straight line every time she’d try and tie the ends together, I could feel the air around her getting heavier all the time and I was tempered by just enough age and sense to know better. I wanted to soothe her then and say, oh leave it be now, it’s gonna be just fine and you know it, and anyways it’s only that old wardrobe mirror is older than dirt and murky as pond water. But I didn’t say one blessed thing because those glass clouds showed the truth all right.

What we had us that day was a failure to prepare good and a commotion to boot, and both of them a fish out of water in these walls made of clockwork and boredom. No, we didn’t see this thing coming, not a one of us, judging by what the blue-rimmed tires of Bill’s Essex kicked up when he came calling the evening previous. Would you believe I still haven’t got a ride in that automobile or any other, and here it is nineteen hundred and thirty? If that don’t settle the fact that I am a country hick once and for all then I don’t know what does.

“I’d like to talk with you a moment in private if I may sir,” Bill started off with Daddy, and I knew we were in for a long haul the way he leaned against the porch post with his hat in his hand and his legs crossed at the ankles, his right foot hitched heel-high and resting on the toe of his wingtips. Like he was settling in to a job he’d been preparing for his whole life. His voice was too loud, all high-pitched and serious as the grave, like the voices men use when they have to stand up and call out scripture in church and they’re kindly embarrassed but hell bent on getting through it.

So Bill talked and he talked and he talked, to a man who does not speak hardly at all and didn’t so much as whisper to his wife on her death bed or mutter a single word to his children for near about a month afterwards. There was talk of intentions and obligations and commitment, of money and health and the sanctity of a family made by God’s holy ordinance. “I know it’s fast and her only seventeen,” he told Daddy, “but I do believe Mrs. Wilkins, God rest her soul, was sixteen, if I’m not mistaken.” It was quiet a long while, and then he said: “I cannot impress upon you enough that my primary intention in this life from this day forward will be to take care of your daughter, sir, with all that I am and all that I ever hope to be.”

And that was good enough for our old ghost father, who never did say a word to Bill Winborne that night but shook his hand hard the way he does the man from American Tobacco who carries our share of the auction out here to Black Creek.

Through the front window I saw Bill skip like a little girl back to his fancy midnight blue riding car and jump in without opening the door hardly. He cranked that thing up and took off under a tent of dust, throwing Daddy a wink and a nod with the apple of his cheek as he went. Kindly familiar if you ask me, seeing as he’d only been out this way three times to call and being his people are from Virginia originally and we didn’t know scratch about them. And here Ellie was to be married to this man in the space of a day! All of a sudden my head was full of air and my legs felt heavy as if they’d been tarred clear down to the soles of my feet. I sank down to the floor amongst the closeness of my brothers and sisters, who looked to be just as shook up as me. Nobody spoke a word, nor moved a muscle I could see, while we waited for Daddy to come in and lay himself out over the hole that had just been knocked into our place in time.

He took two steps backward into this house built by his own two hands and in one turn he was facing us, his weathered arms crooked at his side as if he was able to take another step but could not move for progress at the sight of us sitting on pins and needles and looking for an affirmation or invocation one. He puckered his chin tight and his wrinkled mouth disappeared on him, but when I looked up into his watery gray eyes they were soft and easy, and I was taken aback. I wanted to believe he’d turned whole and was fixing to say something with ragged edges that we could hold onto for once. And as I looked at him, this man I knew as Claude Samford Wilkins, my father who did not exist before the day he walked into this backwater place and first made eyes with Mama, and who did not exist now that she was dead and gone, I felt that maybe he was just then seeing what we had known all along. That he was a stranger to us and always had been. 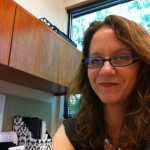 C. Michelle Taylor started her writing career as a journalist covering politics and government in eastern North Carolina. She later wrote on business and economic policy for state agencies and Fortune 500 clients as a consultant. A deep-seeded love of narrative-driven stories and Southern voices culminated in the writing of her debut novel, Indian Fields. Taylor is the recipient of numerous media awards for business and news writing. She is currently at work on her second novel, Door to a Thousand Churches. Taylor lives with her husband and two children in Raleigh, NC.

Rachel Kertz was born in a small town in Missouri in 1988. While earning her degree at Southeast Missouri State University, she became interested in photography and began using her commutes as excuses to go on long drives through the rural countrysides, hoping to find locations and abandoned houses to photograph. She hopes to convey relatable stories in her images that speak to her audience on themes such as loneliness, love, exploration, and the feeling of being alone in unconventionally beautiful places. You can find more of her work at www.flickr.com/photos/atticgirl/.