Houston does not fit the stereotype of your typical Texas town. The image of dusty streets with tumbleweeds rolling by does not apply in the slightest. Houston is an incredibly urban city. Concrete, highways, clusters of buildings towering towards the sky, these endless expanses of city seem to stretch forever. As a large city, it is a center for culture. Art, theatre, architecture. A high quality of these things can be found here.

What it has in culture and diversity, however, it lacks in natural beauty. Nature is not a central part of the Houstonian life. One does not frequently come across the region’s natural features as so many of them have been swallowed up by the ever-growing city. 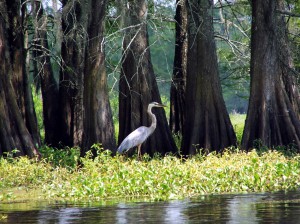 As a Californian, it was difficult for me to adjust to the absence of the ocean, the mountains in the distance, and the sweet scent in the air. The one exception to Houston’s scarcity in beauty is in the trees. In my neighborhood, big oak trees line the streets. The trees’ large sturdy trunks support an explosion of leaves and branches. In many areas, the branches have grown so much that they reach across the street, meeting and intermingling with the branches on the other side, forming leafy tunnels.

Before the sultry heat of the summer arrives, it is pleasant to take walks through these oak-lined streets. I favor one street in particular. Here, the trees are especially tall, and the ceiling of leaves is very thick with little blue chunks of sky peaking through.

On one of my walks through this street, I was startled by an unusual sound. A loud, bizarre squawking, almost like a monkey, grabbed my attention. I looked around, but saw nothing. The noise again pierced the air. This time I looked up half expecting to find an escaped zoo animal; instead, I saw a bird. It was large and completely white with a long yellow beak and a slender neck. It seemed out of place; it was not a city bird like a pigeon or a crow. It looked like it belonged in a place with water. Another noise caused me to realize it was not alone. The trees were full of these birds. I had never noticed it before.

As I know next to nothing about different bird species, I went home and did some research. I discovered that these birds were herons, a bird that lives along a waterside, feeding off of fish, not something one would expect to find sitting in an oak tree in a residential neighborhood. I became fascinated with these birds and frequently went on walks to see them. A neighbor informed me that they migrated through Houston every year and always stopped in this area.

In the time the herons spend in Houston, they build nests, and their babies are born. On multiple days, I’ve walked beneath them and found the fish they had plucked from the bayou for their babies fallen on the ground.

Every morning, the parents would go out to find food. On one of these mornings, there was a storm. The storm was so fierce and strong that many of the babies were helplessly knocked out the trees. Some of them managed to survive, though. These birds grew and left with their parents when the time for migration came.

The herons had adapted to Houston; they had managed to make it their home. A city neighborhood was not their natural habitat, but they had found a way to live there, a way to survive.

This is where my wandering led me. I happened upon the Herons by accident. Finding them was a coincidence; sometimes I think the best things are. Discovering them helped me to realize that beauty can be found anywhere; one just has to stop looking so hard to find it.