The old house had sat alone in the middle of the ranch for at least one hundred years now. Squatters came and went, but it mostly remained by itself. It was a sad existence for the house, staring out across the fields, every day for as long as it could remember. The house itself was glum, and it felt wrong for such a beautiful thing to be abandoned. It was as if there was no love left in the world for this house anymore. Whenever it rained, the raindrops stuck to the window panes, and the house was blue, for it didn’t want to be by itself anymore. It was old, and its floorboard creaked, and it no longer stood up straight anymore. There were empty chairs and vacant beds, and the cupboards were bare, and the house knew that it needed somebody to come and fill them, otherwise it would die one day, alone and desperate for tender care.

On a Tuesday afternoon, a little boy was playing in the field near the house. The house was happy that for a short while it would be able to at least pretend that there was somebody there to keep it company. The little boy, Toby, was dressed in hand-me-down shorts and an old blue and white striped T-shirt, and his trainers were scuffed, and his brown hair messy from all of the fun that he was having from playing in the long grass. Toby played for hours and hours in front of the house, pretending that he was everything from a pirate to a king to a great adventurer exploring the jungle that was the big field that he was playing in. It was quite beautiful.

When the evening drew in, the house creaked and shifted, for it knew that Toby would be leaving soon. There were shouts of his name, and a young girl, perhaps aged sixteen, walking across the field in a pretty rose pink dress and sandals. Her hair was golden, just like the summer sun that was beginning to set. Toby shouted to her and called her Amelia, and the house thought that this name was quite fitting; she looked like an Amelia.

When she approached Toby, she looked at the house curiously and drew closer to it, tugging at Toby’s hand as she went. The house felt embarrassed at the state that it was in; it was hardly a place fit for such pretty people. They made their way towards the front door, and flinched when she managed to push it open without much of a push. It creaked loudly, for the house was unsure of how to welcome new people.

They stood just inside the front door and looked around the room; it was very large with a few chairs and an old dusty sofa and a rug that had completely lost its pattern over time. The house became sad because Toby was frightened that something or someone was going to come and jump out at him. For many years now, the house was misunderstood. People always called it “haunted” and “creepy,” but really, it was just anxious to have a family come to stay and didn’t know how to make them feel loved.

Amelia walked further into the house and did something that the house was most certainly not expecting her to do. She smiled. She turned around to face Toby and gave him the biggest grin that the house had ever seen. She walked over to the windows and pulled the old rugged curtains down and put them near the front door. Next she went for the blankets on the beds in the bedroom and added them to her pile. The rugs came next. Before the house knew it, it had been stripped bare of all of its cloth. It felt naked, and didn’t know what was going to happen next. Amelia picked up her pile and instructed Toby to follow her out of the door. The house became upset, and mourned for its loss.

But, early the next morning, Amelia and Toby returned. They came in again through the front door, and the house realised that they weren’t just carrying yesterday’s pile of cloth, but Toby was pulling an old wooden cart stacked with lots of paint, books, and delightful things. The pair of them set to work immediately, painting the walls of the house. Amelia took to painting one wall yellow, whilst Toby tried to paint the other blue but struggled to reach the very top of it. Amelia helped him to finish it. When they’d painted the whole house an array of colours, Amelia set to work putting the freshly washed curtains back up and making the beds. Toby laid all of the new rugs out, and the house felt clean and completely brand new. They then put the books that they’d brought with them onto the bookshelves in the corner and placed their ornaments around on tables. There were snow globes and dream catchers and picture frames with smiling faces in them. Toby picked some flowers from outside and put them into a vase that Amelia carefully filled with water from the old faucet.

When they were finished, they sat down on the old sofa and looked around, pleased with their work. The house was no longer haunted; it was a home.

Eighty years later, Fred and Lily sit in the house on old wooden chairs next to the bed of their grandfather. He tells them that they must love and care for the house because it gets really lonely without people in it. They smile and tell him that the house will always be loved. The raindrops appear on the window panes when Toby takes his last breath in the house that he and his sister breathed life into. The summer sun shines through the windows and the house feels warm, not haunted like it did for so many years. It is happy, all thanks to Toby and Amelia. 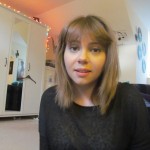