Within a year of graduating, my inventions began to attract attention and I was headhunted as an engineer at Apple Inc. I excelled in every enterprise I was involved in and was gradually promoted to CEO. I was even given the prestigious Steve Job’s Award: A prize for revolutionary development of electronics. Awarded to Rebecca Ivy McFall in May, 2085, for entrepreneurial brilliance and innovation at Apple Inc.

I have always been very independent. Even as a little curly redheaded child, I would read alone rather than play with my siblings. I threw myself into my career, putting my relationships second. I have worked at Apple for over 20 years now, and I have developed their most successful products: iTattoo, an automatic machine that can tattoo picture-perfect copies of any photograph in minutes; iPortal, a teleport that can transfer someone from their current location to anywhere on Earth; iTime, a time machine that can transport someone to any period in history or the future; and now iBrain, a device that allows the viewer to see inside the mind of a dead brain. For the iBrain to fulfil its true potential, I need one last ingredient: Dr Jacob S. Fitzpatrick’s brain.

I sat down to watch the news in my lavish empty penthouse this afternoon and heard: The famous doctor, Jacob S. Fitzpatrick, was found dead this morning, aged 364. It is suspected that the world renowned biologist, who discovered the elixir of life which grants the drinker eternal youth and immortality, has committed suicide. This revelation has confirmed the suspicion that the elixir does not protect the drinker from injury but only prevents aging and death from natural causes. The location of the elixir is still unknown and many are now asking the question: will the secret die with the doctor?

I immediately seized my opportunity and searched for the doctor’s address so I could visit his widow.

“I know who you are, Rebecca. I’ve heard all about you. Why can’t you all just leave it alone? You are not going to find the elixir!” Rachel shook with anger and bit her lip to force back tears.

I felt so heartless for even approaching Rachel while she was mourning, let alone asking for her dead husband’s brain, but I was determined to find the elixir before it fell into the wrong hands.

“I realise how upsetting this is for you, but you have to understand that if I find the elixir, I could change the world. I could live long enough to find a cure for every disease and invent everything humanity would ever need. I just need to know where Jacob is buried,” I pleaded.

Rachel’s paper thin skin visibly quivered at the mention of Jacob’s grave. She dragged her bony fingers through her velvety hair. She knew worse would happen to Jacob’s remains if I didn’t find him. She scribbled something down on a piece of paper and handed it to me with icy hands.

“Please treat him with respect,” she whimpered.

At midnight, after exhuming the doctor’s body from his luxurious tomb, I sawed open the skull and extracted the brain. I reburied the doctor, now with a hollow head, and fled to my workshop.

The slimy, blubbery tissue squirmed around in my hands like wet soap. I had already prepared the sleek, silver, floating bowl of the iBrain with the shimmering electrified fluid which reignited brain activity. I cautiously lowered and submerged the fragile brain.

Thin white roots from the base of the bowl were awakened. They crackled softly as they wrapped themselves around the pink, gooey brain. The organ was soon completely encased inside a white, webbed cocoon. Huge boiling bubbles swam to the surface, and blinding light shone from the brain. I took a steadying breath and dipped my hands into the hot water. Tiny roots slithered up and around my trembling fingers. The light from the maze of squishy flesh flowed into the veins in my wrists and scaled up my arms to the rest of my body.

The flash bleached out my vision. After a moment, once the light eased and I could see again, I realised I was occupying the body of the doctor on an empty, scorching beach.

I could hear waves from the crystal turquoise sea and squawks from hungry seagulls. I could feel wet sand between the doctor’s toes. The air was thick and granulated with sea salt, moisture, and the hot dank scent of coconut.

Everything was hazy and dreamlike as the body I inhabited began to walk towards a grotto on the beach. The doctor drifted down and spiralled deeper into the cave.

He abruptly turned the corner, and I could see a glistening gold stream flowing into a small pool that illuminated the crevice of the dark cave. A solid gold goblet sat beside the small pool. The doctor’s body raced towards it and drank in large gulps from the elixir.

The elixir had the consistency of ink, thick and sticky. It tasted like syrup but with a metallic edge as it slid down the doctor’s throat. The gluey substance began to burn in his chest like raw alcohol, then sharply shifted to a cool soothing sensation.

I could feel the doctor’s body bubbling with energy. His wrinkles faded, his aches vanished, his posture straightened, and his very being felt reborn.

Abruptly I was pulled out and thrown from the doctor’s brain. I immediately realised exactly where the beach was.

My suspicion of the elixir’s location was correct, and I still visit that lonely sizzling beach every decade for a top up. I am now 942 years old, though I still look 25. I have assisted the world’s brightest inventors and scientists in the development of new technology and drugs that have already eradicated several diseases. I continue to prosper, but I have a nagging niggling feeling that something is missing. 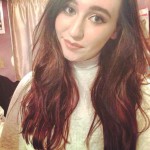 Sophie McNaughton is a 20-year-old student of English Literature, Journalism, and Creative Writing at the University of Strathclyde in Glasgow. She is a writer, journalist, and blogger from North Ayrshire in Scotland. She is a typewriter enthusiast, ’80s glam metal fan, chatterbox, and crazy cat/dog lady. Find more of her work on her blog: Moon Child.