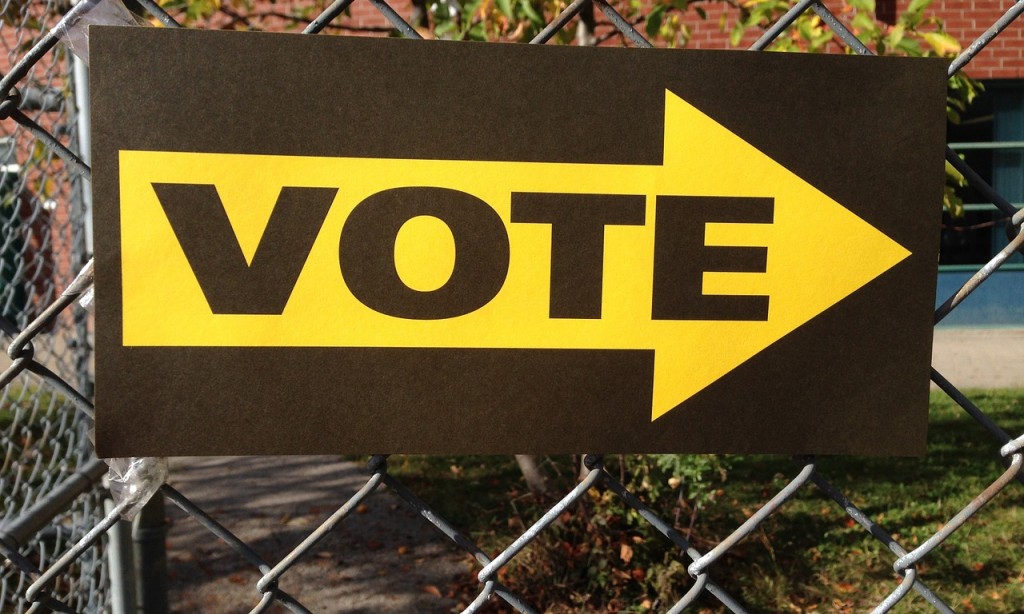 Welcome back, Germ readers! I am extremely excited to present to you a subject that is near to my heart, and that is the importance of the young adult vote in the upcoming primary and presidential election of 2016. As the daughter of two immigrants who came to this country at a very young age, I had been taught for many years — even before I turned eighteen — the importance of voting in the United States of America. My mother always made it her mission to take my sisters and me with her to the polls when we were very young so that when we were old enough, we would have a general understanding of what the process of voting looked like. When I voted for the very first time back in 2012 during the presidential election, I was extremely thankful for my parents always educating me on what it meant to be an active participant in the voting process here in the US.

Unfortunately, the young adult vote consistently has the smallest voter turnout in the United States. There are many reasons behind young people between the ages of 18-24 not visiting the polls when it comes time to vote, and one of the main reasons is often the fact that they simply do not know how. The term “going to the polls” may sound like a daunting task, but in actuality, the process of actually casting a vote can take less than fifteen minutes, and registering takes even less time. The problem we are facing in the US as young people is that our voices aren’t being heard because we are not allowing ourselves to be heard through our votes. As someone who has always been fascinated by our ability as Americans to vote who we want to represent us, I can only hope that what I write to you today will perhaps reach some of you as you start to read about the importance of the millennial vote in 2016.

Did you know that approximately 12,000 Americans turn 18 every single day? Did you also know that there are approximately 79.8 million Millennials in the United States, and that our generation is actually larger than the Baby Boomer generation that came before us? We are also the most diverse generation: about 42% of Millennials identify with a race or ethnicity that isn’t non-Hispanic white. In short, we make up a huge block of people in the United States, and we will continue making up a huge section of our country for several years to come. And yet, when it comes to us voting, we are sorely lacking in the amount of voter turnout, which means that we are not making our voices heard when it comes to electing individuals who will represent us within our government. It is imperative, then, to spark an interest in the election process early, especially toward the generation that will inevitably become the future of this country.

Now, I understand that there is a feeling of indifference amongst young people who are generally frustrated with the political process. I understand the idea of “My vote won’t matter” or “My vote can’t make a difference,” and I am here to tell you that those thoughts are the exact reasons why voting is utterly necessary. Because, in actuality, if every single Millennial made a commitment to vote in the primary and general election of 2016 and in every other election beyond that, we would in fact be the deciding vote in every election for many years to come. The reason the rich and the older generation before us are the deciding vote in every election is because a vast majority of them go to the polls. And do you want to know why they vote? Because they know that that is the only way they are going to be represented in government.

Thankfully, though, in our age of technology, there are many ways to access information on how to vote, why you should vote, and whom you should consider voting for. We are on our phones every single day, and we are glued to our computers just as much. Fortunately for us, there are several sites that will help you register to vote, will explain in depth about the platforms on which each candidate is running, and will tell you when the primaries are in your state. There are even quizzes online that can help you determine who you should vote for.

CanIVote.org can be used for those who don’t know how to register. It’s as simple as clicking the first link on their website. Once you are done registering, it is then up to you to do your research. As an English major, research was my bread and butter, but I know that most of you find it to be a daunting task that requires lots of reading and convoluted language. When it comes to researching your candidates, though, it is actually a lot easier than you think.

Choosing the right person to vote for relies on what you want to see in the future of our country. If anything, researching and deciding on a candidate is solely based on what you want. I tell people all the time that your vote is a selfish vote. This vote is all about you and what you want to see, and if there is a candidate who speaks to your wants and needs, then by all means vote for them. It doesn’t matter what your parents say, what your friends say, or what popular media even says. At the end of the day, it’s only going to be you in that booth, and it’s only going to be you who chooses your candidate.

Take the time to do your research on ALL candidates: democratic, republican, and third party candidates. In order to make an informed decision, you have to be willing to listen to all ends of the conversation. Ballotopedia.org has all the listed presidential candidates who are currently going into the primary elections in 2016, and ISideWith.com provides a thorough quiz for those who still don’t know who they should vote for in 2016. Take note of your top three presidential candidates.

One thing that I really want to point out to young voters is the importance of voting in the primary election. Primary elections do not happen on the same day in every state, so make sure you know when your state’s primary election will be held. If you don’t know what the primary election is, fear not; it is actually a very simple idea. Let’s say you are already affiliated with a certain party, but you don’t like one of that party’s candidates that is running, and you definitely favor another candidate over them. The best way to ensure that your candidate makes it to the actual “running for president” part of the election is to vote in the primaries.

Now, you may be wondering, “Wait, aren’t all candidates running for president?” The answer is both yes and no. If we are getting technical, all candidates as of now are campaigning to be chosen as the sole candidate who will run for president within their respective parties on November 8, 2016. So, if you feel as if one candidate in a certain party is better suited for the presidency, then you definitely most certainly want to vote in the primaries to make sure that he or she is still in the running for the presidency. Primaries narrow the field of candidates before the actual election for the presidential office, and you want to make sure you are being a part of that decision.

I am adamant about being educated about the vote and knowing whom your candidates are because this is essentially our future. Millennials aren’t going anywhere anytime soon. We are still going to be the largest portion of the US population for the foreseeable future, and we need someone who is going to look out for our best interests. There are many people in this world who are still fighting to have the vote in their countries, and the fact that young US adult citizens don’t utilize a right that we are born with is a damn shame. Even if you don’t like politics and the never-ending campaign cycle, one of these individuals will become the representative of our country come June 2016, and young people need to be a part of that. This is your future, and you have to utilize the vote as your voice in the upcoming election.

If you’ve read this and still believe that your vote won’t matter, I am going to leave you with some words from Hank Green, a YouTube content creator and educator of young people all over the world: “The notion that your vote won’t matter because it probably won’t be the individual deciding vote in a particular election is a magnificent failure of imagination. If every young person who used this excuse got off their butt and voted one Tuesday every two years they would literally be the deciding voice in thousands of elections. So maybe it’s time to do that to recognize that the power lies with us. That’s what democracies are…. If you’re not voting, no one is hearing your voice, so they have no reason to represent you.”

And that’s what it all comes down to: If you are willingly not making your voice heard through the vote, then your wants and needs are going to be continuously ignored because your voice at the polls would have been the loudest if you’d ALL voted. We, as a generation, are bigger than any other living generation in America.

You will matter in 2016, and you will continue to matter beyond Election Day on November 8, 2016.