The girl sat by her bedroom window. Morning light sifted through the sycamore. The goldfinch hopped along a limb and chattered its nervous song. The girl whistled back. For the past two weeks, the goldfinch had been weaving its nest in the azalea bush beneath the girl’s window. The bird scurried back and forth, acrobatic flashes of yellow and black, grasses and twigs snared in its stubby beak. The girl checked the nest’s progress every day. What had begun as a straggly mass was now a tightly woven bowl tucked deep beneath the azalea’s fading blooms.

The goldfinch abandoned its song. The bird cocked its head, a 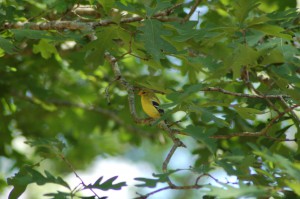 rare moment of pause, then took to the air. Before the girl could stand, the tremors hit. The trophies and pictures atop her dresser jiggled. A pencil rolled across her desk. The girl closed her eyes. The upheaval resonated in her bones, her hands locked upon the chair’s sides. Ten seconds, then stillness. The girl breathed again. The goldfinch returned to its song.

The girl stepped into the narrow upstairs hallway. She was eleven, old enough to look after herself on a Saturday morning. She no longer cried when the Earth shook. The hinges of her parents’ bedroom door sighed. Her mother, still wearing last night’s dress, lay sprawled across the bed. The shoes the girl had slipped off sat neatly on the floor. The girl stepped forward, her body stirring the haze of cigarettes and whiskey. She held a hand above her mother’s mouth. Her breath’s moist current curled against the girl’s palm.

Downstairs, the girl fixed herself toast. Wisps of sawdust littered the linoleum by the backdoor. Her father had been by last night to put in new locks. The girl had sat with him, handing him the tools he asked for. The locks were heavy, thick deadbolts, the girl’s reflection warped in the polished brass. There had been a man on the moon. There had been murder in the canyon. There had been murder in the city, a house little different than hers. Fear on the gritty breeze. Her father had installed the locks but didn’t stay the night. An argument before he left, exchanges that shook the walls, their venom and vanities chasing the girl from the room. The Earth split beneath her feet. Her head white with static. A panic in her chest, a drowning miles from the ocean.

A sleepover last week. A flashlight game, voices in the dark. Her girlfriend whispering in her ear: “They cut the baby out of her. Alive.”

The girl placed her dish in the sink and went outside. The sun low. Chill in the shadows. The goldfinch’s serenade. The girl shielded her eyes and whistled back. The bird masked by the sycamore’s leaves. Above, a blue sky, another beautiful day.

She went to the azalea bush. The dew cooled her bare feet. She nudged aside the branches. 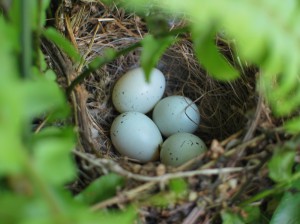 In the nest, three small eggs, oblong and pale and faintly speckled. The girl had been wondering when or if. The goldfinch cried. The girl pulled back, leaves rustling, when she noticed the other egg.

She froze. The egg lay perched upon a nexus of leafless shoots. Perhaps the tremor had shaken it loose. Perhaps the goldfinch, sensing rot or death, had nudged it from the nest. The girl reached into the bush. Dying blooms drifted to the ground. She knew once she touched the egg, she couldn’t return it, her human scent a stain that wouldn’t fade. The egg shifted, a hiccupping tumble between the shoots. The girl lurched forward, the branches scratching her hand, and snared the egg.

She pulled the egg from the bush. The shell lay cool and smooth against her skin. A cut on the back of her hand, a trickle of blood. She thought of the life that waited beneath the shell. She lifted her gaze to the sycamore. The goldfinch twittered. The girl’s mother appeared in the bedroom window. The sun’s glare a cool fire in the glass, her mother a bloodless mirage, a ghost eclipsed by a lowered shade.

The girl considered the egg. She thought of the pictures sent from space, the Earth a swirl of pale clouds. There had been a time she’d cried when the ground shook, but she was older than that now. She cupped the egg, a slow ratcheting of pressure. A soft crack, then a spiderweb of thin fissures. The goldfinch circled above, wings flapping. 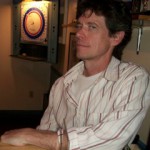 “The Nest” appears in Curtis Smith’s latest story collection, Beasts and Men, from Press 53. He is the author of three novels, two chapbooks, three story collections, and an essay collection. His next novel, Lovepain, will be released from Aqueous books next year. Visit him online here.