When I heard Dr. Christine Blasey Ford’s opening statement, what struck me, as it struck so many people, was her recollection of the laughter of two teenage boys—their uproarious laughter at her expense. It made a memory, one that I’ve often pushed down over the course of my life, resurface.

The school bus in middle school was no man’s land. No adults except for the bus driver who, with his back turned to us and concentrating on the road, could hardly know all that happened or was said on that bus.

I don’t know what day it was or what I did that morning. I don’t know the exact seat I sat in. I don’t remember how or why I’d even been talking to them. But I do remember when one of the two boys I was talking to, the one who lived a couple of houses down and across the street, looked at me and said, “We’ve seen you naked.” I do remember the look in his eyes, how they shone with giddiness, humor, mean-ness, and how he nudged the boy sitting next to him, who was a complete jerk. They were both jerks, but most people would probably only see a couple of goofy boys, because they were that, too.

When the first boy told me this, they looked at each other and smiled.

But the one who lived closest to me told me which window was the one to my room. He told me how they crouched in the bushes at night just outside my window. He told me how from there they could easily look in through the slight gaps at the bottom and sides of my window blinds. He told me how they knew I showered at night and then came into my room in a towel to dress. He went on to describe my body to me, parts of my body in detail, markings on my body that no one could know about unless they’d seen me naked. My body.

As he dropped each little fact, layered one on top of the other, I felt myself go weak. My breath escaped my lungs in tight puffs. He relished in every detail he told me. I felt my blood drain, my tough girl visage fall away, as he described my body. He saw, too, the moment I realized he was telling the truth. His eyes lit up with the knowledge, with letting me know that my body had been his, theirs, for those moments, that they’d violated me, that they’d done it more than once. That they’d been at my window nightly.

And when they saw that I knew it was true, they laughed.

I can still see how one of them turned red from laughing so hard, how his freckles looked on all that red. And I can see the teeth, the open mouth, and glistening tongue of the other one as he laughed just as hard. I can see them framed by the vinyl bus seat—I think brown in color, but it sometimes flashes green in my memory. They sat on the right side of the bus. I don’t know if we were on the way to school or on the way back from school. I don’t remember who else was sitting near me or if they heard. I don’t remember getting off the bus that day.

I didn’t tell my parents. I thought I would get in trouble because, somehow, I had let this happen. Because somehow, as a young middle schooler, I should have already known it could happen and should have prevented it. I thought it had been, or would be told it was, my fault.

That night and each night after, I pulled taut the drapes that were only meant for decorative purposes on my window, and pinned them closed with several safety pins. I became obsessed with no gap showing, not one sliver of light. I checked over and over again, for any tiny gap. I crouched in the bushes, checked from outside.

My mother questioned me about the pins. I told her I didn’t like the light coming in. She told me I was going to ruin the drapes. She took the pins off every morning when I went to school, asked me not to re-pin them like that. Each day I re-pinned them. I did this for years. Someone could have told me they would kill me if I pinned those drapes again. I would have pinned them anyway. As a mother now, I am hyper-sensitive to the blinds in my children’s rooms, the gaps the blinds miss. They have drapes that are not decorative.

Why did I not dress in the bathroom?

Because it was hard to dress in a steamy bathroom. My clothes stuck to me.

Why did I not dress in another room?

My parents would notice. No room was safe after this anyway.

Why did I not dress in the dark?

I was afraid of the dark.

Why did I not tell someone?

Because I was young and scared and I’d learned in so many ways that everything, everything was a girl’s fault.

I’ve written other essays about encounters with boys, men, times when “nothing happened,” but never included this story. Why? Because we’ve learned not to talk about these kinds of stories. We’ve learned to look at stories like this as insignificant or shameful and humiliating only to the victim. We’ve learned to push them out of mind.

I never told anyone about that day. But it has escaped from my vault of memories at times throughout the years. Each time it has filled me with a feeling of shame and anger, before I quickly put it back away. I only told my husband about those boys when I heard Dr. Blasey Ford’s statement. I only told him because of Dr. Blasey Ford’s statement. I was surprised that telling this story aloud after so many years made my voice quiver. I was surprised that only in telling it did I realize these boys had told me about how they violated me, and it was still my first instinct as a young girl to not believe it could be true.

But I am not surprised at how I remember their laughter. Nor at how, for so many of us, too many of us, “indelible in the hippocampus is the laughter, the uproarious laughter between the two.” 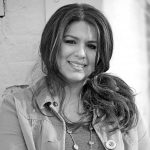 Jenny Torres Sanchez is a full-time writer and former English teacher. She was born in Brooklyn, New York, but has lived on the border of two worlds her whole life. She lives in Orlando, Florida, with her husband and children. The Fall of Innocence is her latest YA novel. Find her on Twitter @jetchez or at jennytorressanchez.com.