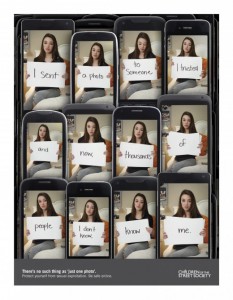 A Canadian charity is doing its part to just say no to sexting.  Inspired by the suicide of Amanda Todd, a high school freshman who was bullied after flashing herself on a webcam, Children of the Street Society launched an ad campaign in the spring of 2013 to help prevent sexual exploitation.

Program Manager Stephanie Owen says, “We are hearing from the schools that they are seeing a huge surge in young people being online and connecting with strangers who are potentially dangerous as well as sharing images from peer to peer.  We are trying to educate young people that what you are putting out there can be continuously shared.”

The video may be short, but it packs a punch.  The campaign’s slogan:  There is no such thing as sharing just one photo. (For more on the not-to’s of sexting, read what our Ninja has to say.)