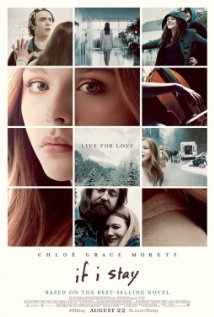 The latest of teen romantic-dramas has taken a rather morbid and underwhelming turn. If I Stay tells the gloomy tale of Mia Hall (Chloë Moretz), a seventeen-year-old cello prodigy who falls into a coma after getting in a car accident that claims the lives of her parents and little brother. The film follows her out-of-body experience, and as the title of the film hints, her decision to either live or die. Her out-of-body experience is intercut with moments leading up to the crash, primarily focusing on Mia’s relationship with her ex-boyfriend, Adam (Jamie Blackley). Blackley plays the older bad boy whose not quite as bad as he seems. Unforutnately, Blackley and Moretz’s performances lacked the key component of all romantic duos: chemistry. Their relationship seemed rushed and artificial, and the genuine aspects of Adam and Mia’s relationship are ruined in the transition from book to movie and in the overall poor acting.

The film is incredibly corny, not only because of the acting, but because of the cheesy soundtrack. If I Stay preaches about the greatness of punk rock, yet not a single punk song is included in the score. The only thing that came close to punk music was Adam’s band, Willamette Stone. Even then, they could only be charitably classified as pop punk — and heavy on the pop and light on the punk at that.

The score is a combination of rock and classical music, symbolic of Mia and Adam’s relationship. Within the soundtrack, Bach Suite is included, a song that can hardly escape most films. The score includes other fantastic cello pieces such as Camille Saint-Saëns Cello Concerto in A Minor, which acted as Mia’s audition piece for Juilliard. Moretz’s passion, during Mia’s audition for Juilliard, is one of the few redeemable moments in Moretz’s performance in the film.

The film overall lacks an artful touch. R.J. Cutler, the director, was not afraid to use the cliché white light interpretation of an afterlife. His shots also lacked variety, making his cinematography hardly praiseworthy.

Additionally, If I Stay is far too long a movie for one with such an empty plot. The plot seems as though it works better in a literary narrative as opposed to a visual one.  The film also comes off as incredibly male-centric, with Mia constantly struggling with the need to change for Adam to fit into his “rocker crowd.” She feels intense guilt about wanting to follow her dreams by applying to Julliard, and Mia acts as though she needs Adam’s permission to be her own person and, eventually, to live at all.

Mia struggles with fitting into her family, much like how she struggles fitting in with Adam’s crowd. Mia’s parents Denny (Joshua Leonard) and Kat (Mireille Enos) seem like characters straight out of Fred Armisen’s Portlandia. The once punk rockers, now cool hipster parents, speak in laid-back sarcastic quips to their children. Despite being far too quirky, their performances are endearing and enjoyable.

Teenage romantic-dramas can be innately horrible, but being guilty pleasures can redeem even the worst ones. If I Stay is hardly such, but it is a good film if you want a laugh.

In her spare time, when she’s not crying over her love for Mr. Darcy, Tracey Thompson watches a lot of films. She decided to put her favorite pastime to use. As Germ’s film reviewer, she’s taking her opinions of the silver screen, and posting them on the little thing known as the interweb. In the meantime, if you ever have a yearning to talk about Wes Anderson, French New Wave, Alex Turner’s hair, or all things Salinger, you can reach her at tracey@germmagazine.com.

How to Make Friends with the Dark: A Dismal, Moving, and Challenging Glimpse at Loss