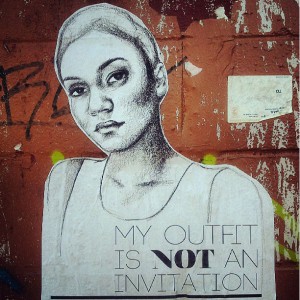 If you haven’t heard about the Sam Pepper incident until this very moment, allow me to guide you through it.

Sam Pepper is a YouTuber who mainly specializes in “prank” videos. I love a good prank because laughing is great, and I really think our society needs to learn how to laugh a little bit more. But what is the borderline between funny and mean? I think Sam took a big step over this line. Like, the line is in New York, and Sam is in Sydney.

Here’s the whole story: Sam went out on the streets “looking” for the Apple store. Since he didn’t quite know in which direction he should go, he stopped a few girls and asked for their help. Oh, did I mention his fake hand? ‘Cause that’s the set-up of this hilarious “prank.” Now, obviously Sam has two hands, but what’s not obvious is that one of his hands is hidden behind his back while a fake hand looks like it’s tucked in the pocket of his hoodie. With the fake hand in place and his real hand out of sight, the unassuming girl from whom he’s asking directions turns her back to him, and he “accidentally” pinches her butt. Totally appropriate, right? *massive facepalm*

Let me tell you that when I first watched the video, my reaction was, “What the hell?” I was confused at first because of the girls’ behavior. Sure, they seemed embarrassed and confused, but no one fought back or punched him in the face. This fact did cause me to have a little bit of a freak-out, but then some wise comments on the video seriously  made me think.

Would I be so brave if I were the victim of the prank? Because if I want to be totally honest right now, the answer to that is “no.” I wouldn’t be so brave. We all have different reactions to these kinds of situations because we haven’t been taught how to react properly to harassment.

Not surprisingly, the video received an enormous amount of negative reactions. People in the YouTube community came together to report Sam’s video and managed to get it deleted. And what was Sam’s reaction? Two more videos: one of them of a girl pinching a man’s butt (okay, how is that going to help?) and the other of Sam telling his viewers about the “true purpose” of his original video — which was, predictably, about “discussing street harassment.”

He is allegedly really happy that his video has started such a storm of indignation. He was “inspired” by a male friend of his who had experienced domestic violence from his partner.

Now, I do agree with some points made in Sam’s “apology.” Yes, we (as a society) totally need to react to the problem of street harassment, and, yes, we are often guilty of thinking that the victims of sexual harassment and domestic violence are just women.

But this does not excuse the fact that in Sam Pepper’s original sexual harassment prank video, he mainly targeted women. In order to “raise awareness” about male domestic violence, do we honestly think that methods like the one Sam Pepper employed are the answer?

After all, I think that Sam’s video was wildly inappropriate. Even if you are motivated by a good cause, this is not normal. This is clearly straight-up sexual harassment. Sure, do your research and speak up about an issue, but don’t try to solve a problem by instigating it.

Do we need to talk about street harassment more? Yes. Do we need to teach women and men to stand up for themselves? Hell, yeah. But this is definitely NOT the way to do it.