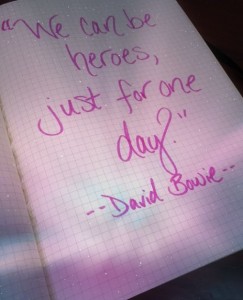 I remember loving Labyrinth’s magic and glitter and its Goblin King all through childhood. Then I read The Perks of Being a Wallflower as an adult and searched endlessly for that tunnel song so I, too, could feel infinite.

When I heard “Heroes” playing through that tunnel in Stephen Chbosky’s film adaption of his own novel, I was amazed. I guess I shouldn’t have been surprised to know that David Bowie still made the world feel infinite.

Stephen Chbosky writes about what it’s like to be a wallflower growing on the outskirts of life. In the novel, Charlie writes letters to us in hopes that we will understand, and I always did. Charlie feels like an outsider, and I remember feeling the same way. I’m sure that Starman who sings about what’s waiting in the sky was an outsider at some point, too. But what Charlie and Bowie taught me was that it is okay to be different.

I think that is one of the most important lessons I learned from them.

Now I think about our world today, and it is a scary one. It is not the fantastical world of Jim Henson, though even there we learned that life isn’t fair. But what has happened more than just the unfairness of life are the atrocities that plague our papers and our feeds and our souls.

I wonder if we can ever be the heroes we need to be to mend this broken world.

I hope we don’t forget the legacy that David Bowie is leaving behind.

As I write this, I’m listening to “Heroes” and imagining the Pittsburgh tunnel with its vast possibilities and superb acoustics that make this song even better. I tell myself that I am infinite and that this life is infinite and that somewhere out there someone will keep singing the songs so we might listen.