Why would they be surprised that I fell in love with a chain saw? Instead of dolls when I was little, instead of pink and frilly ruffles and bows, instead of flouncy dresses and stick-thin high heels, instead of giggly small talk, instead of nodding prettily to everything the cute boy says, with a seductive whisk of my hand to toss my long blonde hair over my shoulder, just so, just so that it catches the light and maybe blinds him into worship.

I don’t collect boys. I don’t collect anything. Collecting things, that’s like holding onto the past. I don’t live in the past. There’s too much muck there, and I have worked too hard and too long to get the muck off my boots. I leave pinning butterflies to corkboards to others, scientists or sociopaths, doesn’t matter, not my business, no more than I want anyone paying business to mine. 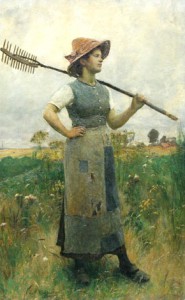 I’ve been called a tomboy, and I shrug that off, but I will tell you now: I don’t appreciate that tag. I mean, think about it. Why give a girl a special name for liking a chain saw more than a bow in her hair? A girl can be one or the other, or neither, or both. If she wants to saw down trees in high heels and mini skirt, well, more power tool to her.

So I climb trees, and I have since I was a kid. Scraped knees don’t scare me, didn’t then, don’t now. When I was a kid, I’d sit in the highest branches of an oak tree across the street from our house, swinging my legs beneath me, singing at the top of my lungs. Scared the squirrels, no doubt, but I had all this music in me I just had to get out.

Now when I get that chain saw humming, I hum along, too. It’s satisfying work. Not just sawing up chunks for the wood stove, piling them up neat as a stack of Lincoln Logs in the wood bin, but pruning the tree of what is healthy and what is not, shaping it up to be at its best, keeping it clean of pestilence and disease.

My mama didn’t even know what an arborist is when I told her that’s my life ambition. Her face kind of squinched up, her eyebrows doing a curl that arched over her squinched eyes going dark.

An arbor-what? But why? She wanted to know. When I tried to explain, I soon realized she didn’t really want to know at all. Not about how I love trees, the living ones for scraping cloud bellies, the dead ones for their neat and orderly rings when I cut them open. And that fresh cut wood smell. Oh. It’s better than any of her pricey perfumes. I tried to tell her how I love life among the trees, and that I couldn’t imagine any cube city in any office building ever giving me that same feeling of tree high.

She waved me off and rolled her eyes.  But what do you DO with the trees?

I talked to her about tree topping and crowning, about pruning and trimming and grafting, about bringing a diseased tree back to thriving life, but Mama’s eyes glazed. I knew what she was thinking. Then she said the very words:

“Honey, why would a pretty girl like you want to be a tree surgeon when you could marry a real surgeon?”

I was going to tell her to catch up to the current century, but bit my lip. Some things aren’t worth the sweat. She’s one of those who cherished the doll and batted long lashes at my father to get him to toe the line, the line leading down the altar aisle that then leads on to purgatory.

“How’d that work for you, Mama?” I snipped instead, saw the wet come up instantly in her eyes, the flush spread across her cheeks like a slap, and bit my lip too late. Why did I do that? Where did that come from?

Sometimes you have to cut the diseased limb from the trunk. Sometimes a chip off the old block …

Oh sheesh. I rolled my eyes at my own self.

Mama had wanted me to win the battle she’d lost, but I wasn’t having it. I wasn’t interested in doing battle at all. I’d had enough battle in my sapling years. I’d taken to carving little animals out of wood pieces I snagged from the fireplace. Stole my father’s Swiss army knife and made it mine. He didn’t notice. There were a lot of things he didn’t notice.

A line of wooden animals marched across my windowsill. The tiny squirrel was my favorite. Chipper little thing, mischief carved into its eye, bushy tail flipped up and over its back with attitude.

I’d made hundreds of these little critters over the years, chipping away as the thuds resounded on the other side of the wall. The wails, the pleas. The promises made over and over that no one would keep. I’d made raccoons, too, with arched and angry backs, black eyes just like Mama’s the next day.

All those years, when we stood eye to black eye, Mama and me, we said nothing. She said nothing. And I didn’t ask. The only way to keep that forest from falling was by make believe. If no one speaks, does the fallen tree make a sound, a crash?

There is a wailing in the woods that no one hears but the lone wolf, knocking her head back to howl, howl, howl at the hidden moon.

Call me what you will, tomboy, rebel, lumberjack. I’m a girl with a chain saw. I will fell the trees that shadow the forest with disease. I will plant new forests, birch groves, valleys of shushing pines, groves of evergreens thick with sticky cones. I will carve my name in the bark and heal it again with the resin of the pine, the color of amber, and it will be enough. My name will be enough. 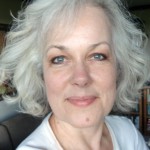 Zinta Aistars is the creative director of a writing and editing service, Z Word, LLC. She is the founder and editor-in-chief of the literary magazine The Smoking Poet, and the author of three books. Zinta lives on a farm in southwest Michigan.