Names are important. Some characters are easier to name than others, and that was definitely true of Theodore Finch and Violet Markey, my two main characters in All the Bright Places. 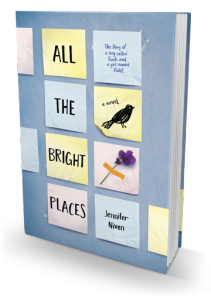 (For those who don’t know, All the Bright Places is my eighth book and my first YA. It debuted in January and, in dual narration, tells the story of a girl who learns to live from a boy who intends to die, also known as The story of a boy called Finch and a girl named Violet.)

When I sat down to write Finch’s first chapter, I heard his voice in my head saying, “I, Theodore Finch, being of unsound mind…” I never even thought about his name. It just appeared. (Probably unconsciously influenced by Atticus Finch in To Kill a Mockingbird, one of my favorite books.) I liked the sound of Finch. At first I experimented with calling him Teddy, but he wasn’t Teddy. He was Finch. Always Finch. Later on in the book, he tells the story of a cardinal that killed itself by smashing into the sliding glass door of his house. That only made the Finch seem more appropriate. The name just worked.

Once I had Finch, I worked to find “Violet Markey.” I knew I wanted a classic-sounding name and landed on “Violet” pretty quickly.

(The name Violet means “purple” and is one of the top ten most-searched names on nameberry.com. “Violet” was wildly popular 100 years ago, but it started dying out in 1920. We can thank Jennifer Garner and Ben Affleck for almost single-handedly resurrecting it when they gave the name to their daughter.)

My Violet’s last name took a bit more thought. I consulted baby name guides and tried Violet This and Violet That, but nothing clicked. And you need a character name to click — at least I do, if I’m going to really be able to see that character. 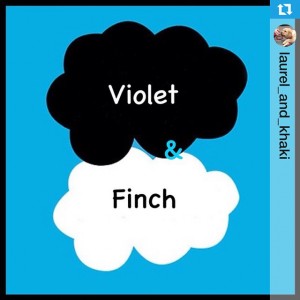 At the time I was writing All the Bright Places, I’d just wrapped up my second draft of American Blonde, which takes place in Hollywood in the 1940s. I did a lot of research for that book, and in that research I’d come across the story of an actress named Enid Markey, who played Jane in the very first Tarzan film in 1918. Something about the name stuck. It was different but didn’t seem to be trying too hard, and I liked the way it sounded with Violet. It ended up being perfect.

I didn’t choose it so that Finch could call her “Ultraviolet Remarkey-able” or so that the art department at Random House could create the world’s cutest finch and violet drawings to represent the characters — that was just creative serendipity. 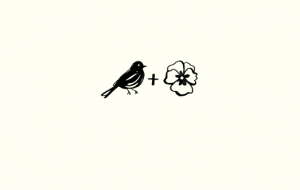