I’m sure that by now all of us have at least heard of the Oscar-winning film Whiplash and J. K. Simmons’ astounding performance of a pretty shocking character. Whiplash focuses on the relationship between young college freshman Andrew (Miles Teller) and his professor/band director, Terence Fletcher (J. K. Simmons), and it ultimately leaves the audience with the question, “Where is the line between pushing someone to their full potential and being a psychotic maniac who emotionally abuses people?” 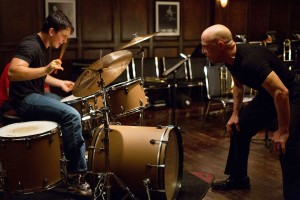 In case you have not seen the film, it is set at a prestigious music conservatory, of which Andrew is a student and Fletcher is a professor. Andrew is a freshman who is accepted into “studio band” (the best band), which Fletcher directs. Fletcher’s goal is to push Andrew to be the best musician he can be, and his means of doing so are not only unorthodox, but straight up abusive — emotionally, mentally, and even physically. Fletcher screams racist, homophobic, sexist, and triggering insults at his students and even slaps them — all the while pitting his students against each other so the competition between them keeps them working harder.

In the film, we see Andrew practicing constantly. He ends up living in his practice room, and he plays drums until his hands bleed. He breaks up with his girlfriend because he’s not allowing himself to focus on anything else except drumming. Andrew’s dedication to Fletcher’s jazz band and to drumming almost ends up getting him killed.

Yes, this is movie is as dramatic as it can be.

The coolest and also un-coolest thing about this film is that it introduces jazz to this generation. Honestly, jazz isn’t the most popular style of music (unless you are a jazz musician), and it’s very definitively not in the mainstream. So, with a captivating movie like Whiplash, more people are more interested in jazz now. I’m sure plenty of people have ventured out to their local jazz venue on account of this movie, which is brilliant! At the same time, though, this film is so wrong, as it paints a horrible picture of jazz. Being a music major in college is definitely stressful and hard — and, yes, there are hours upon hours of practicing and pressure — but it should never be abusive. There shouldn’t be a fear that your professor is going to hit you if you don’t get a part right.

In addition, Whiplash also portrays musicianship completely inaccurately. The ensemble members are in constant competition with each other and seem to genuinely hate each other. In reality, attitudes like this are represented through the music; ensembles always sound better when there’s a sense of community and communication. Communication is seriously the key when it comes to performing in a group.

Also, the way Andrew is seen practicing is unproductive, as it ultimately gets him nowhere because he’s frustrated and not actually practicing. There’s a lot of technique and a lot of theory behind practicing. There are exercises that help you get better at your instrument; it’s not just about playing faster or playing louder. Tone, dynamics, timing, rhythm, phrasing, breathing, emotion, performance, etc., all play into practicing. You do not learn a double time swing by banging a cymbal as fast as you can.

All that being said, Whiplash truly is an excellent film and a celebration of jazz music that I freely admit to having seen five times — despite its flaws. The story is intricately crafted, and J. K. Simmons and Miles Teller give truly enthralling performances. I will warn you, however, that Whiplash is a big ball of anxiety, so please watch with caution.