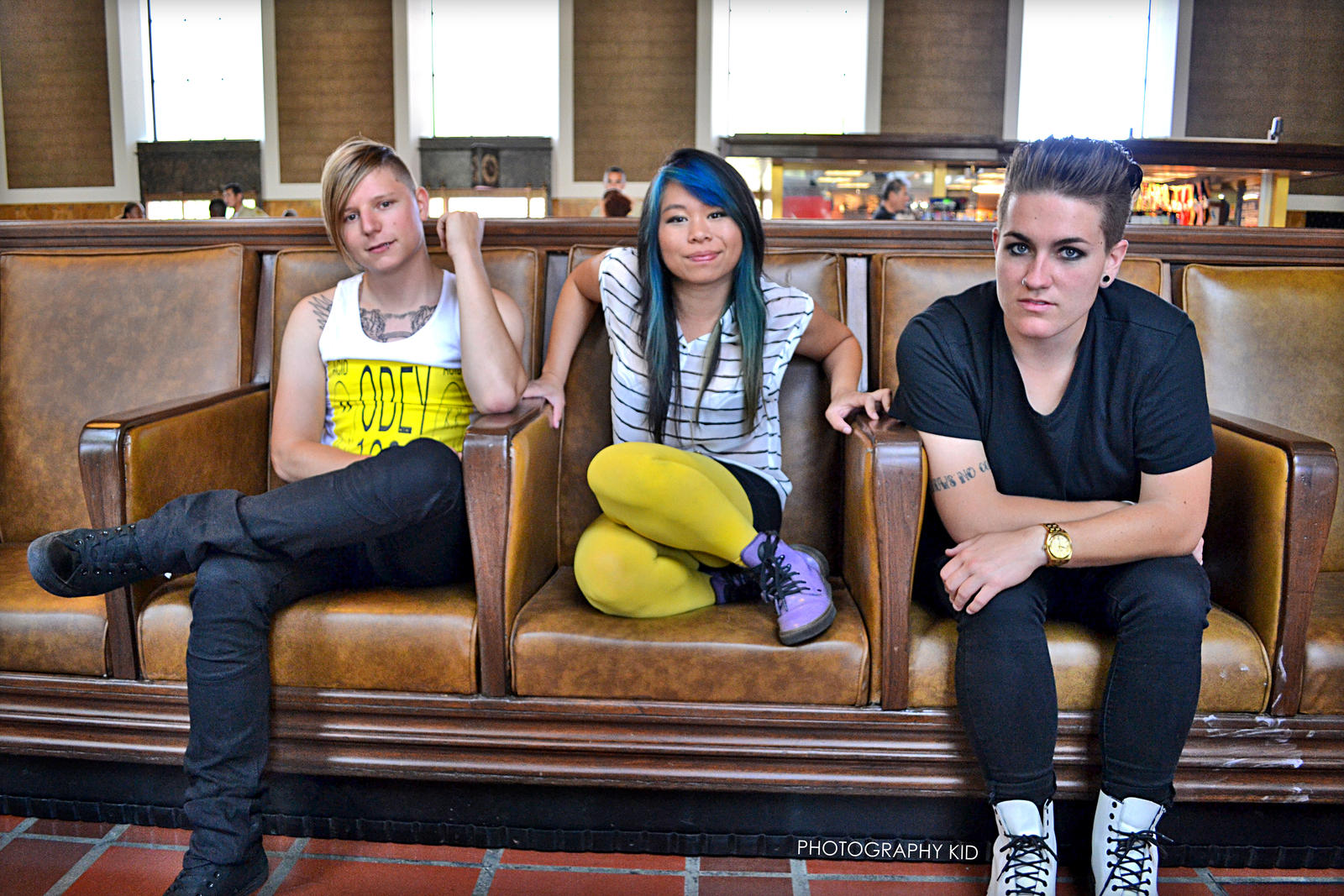 One of my favorite things about being a musician is being friends with a ton of other musicians who all have their own bands. This summer while volunteering at Rock ‘n’ Roll Camp for Girls Orange County, I had the great pleasure of meeting two amazingly talented (and all around wonderful) ladies who make up 2/3 of the LA-based band WASI.

*In the interest of full disclosure, I am completely biased here, which will become blaringly evident as I gush over how much I love this band and these people.

Listening to just the first few bars of any of their songs will have you completely hooked and singing for the rest of the day, believe me. I would have totally annoyed all of my friends had they not loved the sound as much as I did. The band — made up of Cosmo on guitar, synth, and lead vocals, Jess on bass, synth, and vocals, and Carlo on drums — has a perfect blend of SoCal summer jams, ear-catching synth lines, and melodies that promise to never leave your subconscious. If you ever need something to make you smile, make you sing, or make you dance, this is your band.

I got the chance to talk to WASI about their inspirations, creative process, and general awesomeness:

Germ Magazine: First off, thank you so much for taking the time to talk with me. I’m sure I have made it abundantly clear how obsessed I am with all of you, and I’m so excited about what you do.

Let’s begin by getting to know you a little bit. Tell us how you met and how you came to form WASI.

Cosmo: It’s funny. Jessie and I used to be in a band that would sell CDs outside of venues… and one day, after forcing ourselves to get out of the house to promote outside of Chain Reaction, we met Carlo who was on tour with his band from Boston. We kept in touch via Facebook! Few years later he announced he was moving to LA to pursue music, and at the exact time we were looking for a new drummer, so we hit him up to hang out… and the chemistry clicked from there!

Jessie: Cosmo actually approached me in high school and asked if I wanted to play a show with her! We had three weeks to learn our instruments and write a bunch of out-of-tune punk songs, but we did it!

GM: You’ve described yourselves as a “riot-pop” band. How did you come to that phrase and what exactly does that mean?

Cosmo: We’re heavily influenced by the riot-grrrl movement, and I think you can totally see that at our shows. We wanted to make sure to incorporate that statement into what we’re about, and voila: Riot Pop.

GM: As a band, who and/or what inspires your musical (and lyrical) style?

Cosmo: Personally, I am HEAVILY influenced musically and lyrically by British Punk/Post Punk, especially The Clash.  Le Tigre, Yeah Yeah Yeahs, The Ting Tings, and Matt and Kim are also huge influences. I think you can totally hear all of that in our music, the stream of conscious meets dark and rebellious lyrics with that touch of an optimistic vibe.

Jessie:  I’ll admit, I’m a Miley Cyrus and Katy Perry fan! I’m also really into Taylor Swift’s “Shake it Up” song. India Arie, however, is my all-time favorite artist… especially lyrically. I love artists who I can relate to with their story  of being the underdogs. Being inspired by them is what got me through my hardest times.

GM: A lot of our readers are the creative types — writers, artists, singer-songwriters, etc. What can you tell them about your creative/writing process?

Cosmo: Jessie and I have been writing together foreverrrrr. So much of the music and lyrics happen at the same time, so when we’re reaching out to that creative part of ourselves, everything just spills out, one note inspires the next idea.

Jessie: We write a million songs with a million different parts, but when we KNOW we have a good song at hand, we’re able to finish it and go, “F*ck it. Let’s hit the studio now and get this out there!”

GM: Would you say you prefer taking the time to refine and perfect a song in the recording studio or do you more enjoy the energy and immediacy of a live performance?

Jessie: Playing it live first really helps us shape the song before we take it into the studio. We start to understand what the song is about before we overanalyze all the little details.

Cosmo: When you’re out there working off the adrenaline of a live performance, we say/do things that we didn’t know we could do as the whole set is just driven by that crazy energy. That’s what I love so much about punk artists; they really just go up there and represent more than just the music. The songs are the foundation, but the performance  is about something way bigger, and it invites everyone in the audience to be a part of it. Once we feel that energy out, we know what we need to replicate in the recording.

GM: What makes your shows so special or unique? What sets you apart from other bands?

Cosmo: I love when I see artists on stage that really expose themselves in a way that is so vulnerable — driven by that live music energy-adrenaline. I especially love when artists are about something bigger than themselves. The whole audience knows what’s up, and they are there because they want to join that energy. As a band, we try to capture that energy and invite everyone and their mother to be part of it.  Getting that angst and energy out during our live shows is an invitation for everyone to also forget where they are and join us.

Jessie: I hate going to shows where we’re staring at the floor the whole time waiting for something interesting to happen on stage! If that was the case, I’d just go listen to the band’s album.  We try to give the audience an experience of what we’re about, so that way they feel just as part of the show as we were.

GM: What has been your favorite thing about being a part of WASI?

Cosmo: What I love about being part of this is that being so DIY since day one, we KNOW what WASI is about. The questions and negative thoughts can come, but I think the DIY attitude has given ammunition to fight off that crap as we’ve worked so hard at understanding what we’re about as musicians and people.

Jessie: I love doing what I love and then using that to inspire others or give back to the community. We’ve gotten letters and emails from fans saying that our songs have helped them through really hard times, and that feeling of knowing I made a difference in someone’s life is irreplaceable.

GM: Finally, what advice would you give to budding musicians?

Cosmo: Hold on to who you are, what your music and everything your band is about, and use that as your guide. Knowing who you are will help in taking risks and doing things out of your comfort zone.

Jessie: More people than you can handle will tell you to stop, turn around, and do something useful with your life. Listen to YOURSELF and don’t give up. Take it in and keep going. Also, be humble and always be the person to ask someone, “What can I do for you?” That mentality will just make the journey more fulfilling and will just put you in a better circuit of people. After all, this whole industry is based on friendship!

GM: Thank you again for agreeing to this interview. You guys are so great, and we can’t wait to hear more from you!

To get a taste of WASI, check out the official music video for their song (the one that got me hooked) “Adolescents”:

If you know a local band that you think deserves some recognition, let me know, and I’ll check them out. Maybe you’ll see them on Germ in the future!