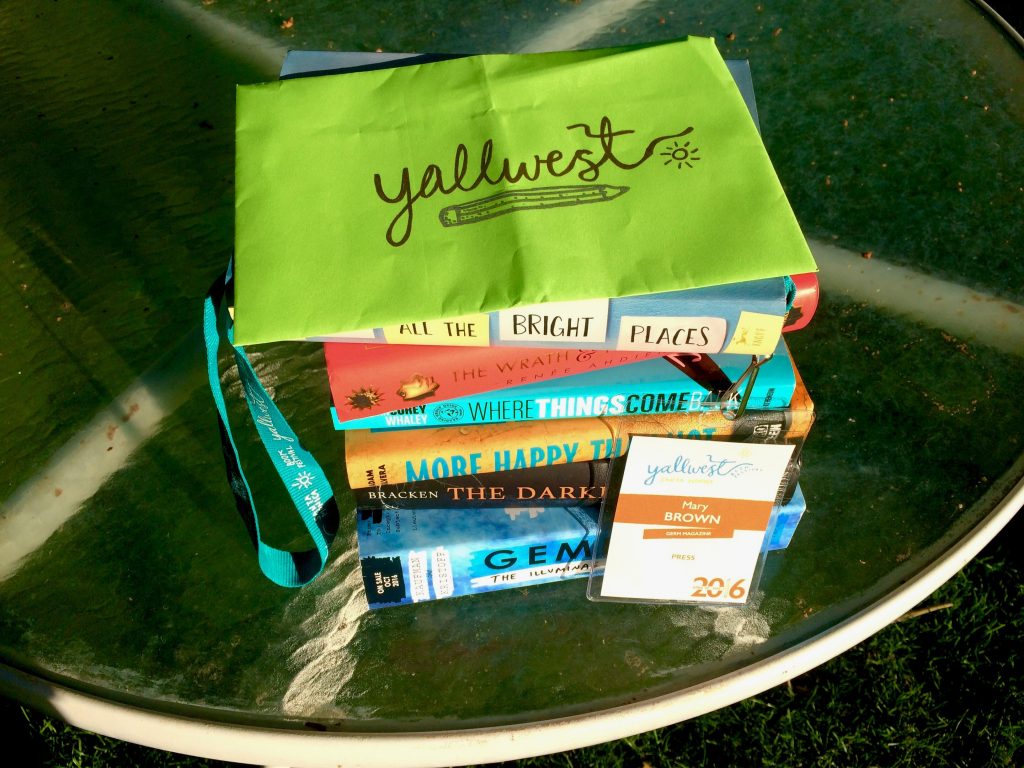 This year marked the second annual YALLWEST Book Festival. YALLWEST is a gigantic festival of books that took place in sunny Santa Monica, April 29th—May 1st. It was last year at YALLWEST where I met author/Germ Founder Jennifer Niven for the first time, and we talked about how much I loved reading Germ Magazine. She encouraged me to contribute something myself, and now here we are! This year was just as memorable. Here are 7 of my favorite things from YALLWEST 2016.

I got to spend my time at the book festival with a bunch of the friends that I have made online, in real life. It was so great to hang out with old and new friends that all love books just as much as I do. We got to hang out and fangirl over our favorites together. I cannot wait for the next time that I will get to see them again.

I got to interview John Corey Whaley, author of Where Things Come Back, and pick his brain. We got on the subject of movies since we are both big movie lovers, and I got to ask him what he thought about the new Star Wars movie, The Force Awakens. I thought Whaley summed it up perfectly when he said, “It was like the Star Wars that I always wanted but didn’t know I wanted, till I got it.” Then we got to fangirl/fanboy together over the Star Wars: Rogue One trailer.

Note: Everything is not always roses and sunshine. At the very beginning of my interview with JCW, having taken the super duper, waterproof/drop-proof case off of my phone to record the interview without muffling the sound, a giant gust of wind came up and lifted the tablecloth off of the table, completely dropping my phone onto the ground. The screen on my phone shattered into a million pieces, but the show must go on. I just continued the interview no sweat, and it was completely worth it. I wouldn’t trade my experience for anything. Bad things can happen to anyone; it is all in how you deal with them.

While eating lunch with Australian authors Amie Kaufman and Jay Kristoff (co-authors of The Illuminae Trilogy) and Erin Bowman (author of The Taken Trilogy) we learned that they do not have snickerdoodle cookies in Australia. Kaufman and Kristoff were confused when Bowman offered them the cookie, as the name “snickerdoodle” sounds ridiculously funny to Australians. We then spent the rest of the meal comparing differences between both the Australian and the American versions of English. The whole thing was a side-splitting, hilarious good time.

4. Learning that Adam Silvera wanted to be a Death Eater

Adam Silvera, author of More Happy Than Not, is an incredibly charming and hilarious guy. While hanging out and chatting with him, I learned that he always admired Voldemort and wished he could be a Death Eater. He then realized how that sounded after I about died of laughter. We are talking actual, hysterical, rolling on the floor laughter. Voldemort is a great fictional villain, one of the best really, so I can see where Silvera is coming from. Some of my favorite moments at YALLWEST were spent talking to Adam Silvera. He is a lovely person: welcoming, witty, and the life of the party.

I screamed, cried, and laughed out loud to the fabulous audiobook of Reneé Ahdieh’s The Wrath and the Dawn. I simply loved her unique retelling of A Thousand and One Nights, and her writing advice was absolutely what I needed to hear. She was my first interview, and talking with her was like sitting down with a fabulous mentor. She signed my book: “Make the story worthy of you.” Those words mean a lot to me and motivate me so much.

6. Chatting with the lovely Alexandra Bracken

Interviewing Alexandra Bracken, author of The Darkest Minds Trilogy, was really fun and easy. Although we had just met, she is so cheerful and easygoing that she made talking with her seem just like chatting with an old friend. It was refreshing learning that she only ever wanted to write books for kids because she had so much fun reading when she was younger and wanted to replicate that feeling. Children’s and Young Adult books are for everyone! On writing, she says, “If you are not a little scared, you are not pushing yourself enough.” Are you inspired yet? I certainly am!

7. Being a part of PolandbananasBOOKS’ “This Is YALLWEST” music video

So a friend of mine, Christine Riccio, a.k.a. PolandbananasBOOKS on YouTube, made a fun music video about YALLWEST, and I got to be a part of it. She changed the words to the song “West Covina” from the TV show Crazy Ex-Girlfriend to be about the YALLWEST Book Festival. It was crazy cool to have a part in the music video, and it was a blast to film. The best thing was watching Jennifer Niven bust out her awesome dancing skills for a great cameo! It was super fun. Here it is if you want a look-see:

So there you have it! I hope this inspired you to join us next time for YALLWEST 2017!