“Why? Scared?” I taunt playfully, tugging at the hem of her shirt.

She caved in and followed me through the long, scratchy wheat creating a sea of gold around us.

I’ve been here before. I’ve walked this exact same route, time and time again. Tiresomely following the same trail, repeating the same steps. However, I let her lead the way, let her believe she’s in control of me. She smiles, innocently, as she lets the wind dance through her hair.

The air is warm, but there’s a chill in the air. I like it. Seemingly pleasant at first touch, but with something bitter streaking through it, subtly taking away its perfection.

Her pace picks up as if she’s eager to find her way into the house, filled with a childlike curiosity to explore. A venture into the unknown. From here, she looks happy, something I know she is not, and has not been for many years. Her dark hair somehow masks the vacancy behind her eyes, so all I can see is her smile. A façade.

She stops, feet away from the door of the house, next to a tree, bare and lifeless. Exposed and beautiful. I grab a low down branch and swing myself up and over to sit on it, reach for her, and pull her up too.

“Are you sure about this?” She chews her lower lip and looks at me with a pain behind her eyes, an uncertainty.

I hesitate a minute.

She presses a finger to my lips, swings herself down from the tree, and beckons me toward her.

I follow her, landing with a thud on the dusty earth below. When I straighten up, I notice she holds something in her hand. Her brow is furrowed, and she’s chewing her lip again. She holds a piece of paper up so that I can see it.

‘MISSING’ it reads. A black and white photo of a girl smiling, with the same vacant eyes as the girl standing before me, sits beneath the bold lettering.

“I read about her in the paper. They still haven’t found her. Do you think they will?” She looks at me hopefully.

“No. I don’t. When people go missing it’s because somebody doesn’t want anybody to find them. It’s an act of selfishness. Either the missing themselves, or somebody else, wants that person to belong to them.”

“Runaways leave for freedom. They want control of their own life. They want to be themselves. They want to leave everything behind. Victims have their freedom stolen because their attacker, or their captor, wants to be the last person to see them how they’re known. It’s almost a beautiful gesture.”

She looks concerned for a second then drops the flyer to the ground and begins to edge her way towards the closed door of the house. She pushes it open, and I follow her in, locking the door behind us.

She starts to kiss me and lead me up the stairs, kicking open the first door she comes to. Behind it is a relatively new bed, with a clean white sheet and two black pillows. She leads me over towards it, but nobody controls me. I let go of her hand. She looks almost alarmed until I smile at her.

She breaks her trance and begins to survey her surroundings, noticing that the walls are papered with posters, all of which read ‘MISSING.’ All of which have photos of girls with vacant eyes and artificial smiles. There are eight different ones, but they all alternate, covering the four walls surrounding us.

Then her face drops, the smile disappears, but her eyes come back to life. Wild with adrenaline. Free of the vacancy that once withheld their ferocity. Exposed and beautiful.

She heads for the front door, only to find that it is locked. Only then does she notice the eight pairs of shoes lined up along the skirting board.

“Take a seat.” There is a coldness in my voice which sounds just like my father’s.

She sits down on a red velvet armchair, opposite an identical one, which I sit in.

She ponders it for a second before a tear rolls down her cheek. I catch it, but she winces at my touch.

“Where are they?” She asks me. I assume she means the missing girls.

The tears flow from her eyes so fast now that they’re not worth catching.

“You’re not happy in this world,” I say. “You need a new beginning, a reincarnation. You should leave your shoes there.”

She follows the instructions and lines them up beside the others.

I lead her into an underground utopia, thriving with life. Packed with hundreds of people — all deemed missing. An unknown wonder, which I stumbled across accidentally.

“You stay here. You stay here until this is no longer the utopia you desire, until you lose the ferocity in your eyes, and you need another new beginning.”

“How long does that take? What do I do then?” Her voice cracks, but her face is so alive with anticipation.

“Some of them never leave. If you leave, you go back home, as if nothing happened. You simply tell everyone you know it was a vacation. You were finding yourself.”

“Thank you.” She walks backwards towards her new world.

“I told you,” I shout down the tunnel. “It’s a beautiful gesture.”

Her voice is so distant now, but I still hear her reply. “Almost!” 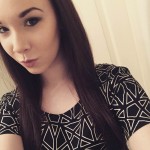 Chloë Jessica is a 16-year-old from the UK. She’s been writing poetry and short stories for about 6 months. Literature is one of her passions alongside music. Some of her favorite authors include Veronica Roth, John Green, and, of course, Jennifer Niven.