The first day of my junior year was September 6, 1989. I walked into room 404 for my first Creative Writing class. I had no idea what to expect. It was a typical English classroom; the desks were arranged in a horseshoe pattern. English teachers arranged their desks in a way so no one was stuck in the back and we could all see each other. I was wearing my 10,000 Maniacs Blind Man Zoo concert T-shirt, denim shorts, and China flats. I was determined to be different that year — glam. I had a journal all set for writing exercises. I was the first one there. I saw several issues of Esquire on a table. Nearby was an old time stereo with a tape player and turntable. There was also the fated coffee maker. We were allowed to have food and drink in the classroom, normally a huge no-no in Ygnacio Valley High School. A desk sat in the middle of the room.

I sat down. Made sure I had a pen. Looked around. The room filled up. The local wrestling star came in, talking with a friend of his. Two dark-haired girls walked in next, along with a red-haired girl and a girl with long blonde hair. Two band geeks walked in and sat by the door. Everyone seemed to know each other. My best friend Meranda was taking the class with me but wasn’t there yet. I knew one other person: my friend Sean from my Human Relations class. The class was made up of mostly seniors, popular kids. One boy was there with his friends. He was blonde and tall, wearing his letterman jacket. I wondered if I was in over my head. I read their writing. They were super good. What was I thinking?

Our teacher walked in the room. She looked at all of us, shook her head. “You all showed up,” she commented. Nervous laughter. “I hate saying this, but if you’re going to be in here, be prepared to write. The class is almost full to capacity.” Two girls said they were going to take it next year. “Oh, thank you!” my teacher exclaimed. “No offense, but then it’s less of a hassle at the office.”

My teacher’s name was Jane Juska. She was five foot one, late fifties. She wore glasses, a sweater, and a skirt. She had short gray hair and a friendly face. She sat down in the desk in the middle of the room. “Okay, I wrote you all a letter.” She passed out a letter to us.

The letter acknowledged that the creative writing class had a loose reputation. Coffee drinking in class. No censorship in writing. Don’t think if you took Jane Juska’s class that it was going to be easy. Nope. It was going to be hard. We would be writing. And writing. Every day. Workshop, workshop, workshop. We would be talking about writing and what we were writing about. Fridays would be conference day, where people could sign up and talk to her about writing.  At the end of the semester a portfolio would be due. I straightened up. I was in the right place at the right time.

The boy in the letterman jacket always reminded me of Emilio Estevez’s character in The Breakfast Club. They even shared the same first name: Andy. I wondered, Gee, why is that jock in a writing class? But he wrote and wrote. I remembered Andy from middle school. He was a year ahead of me and was everywhere in the yearbook. Dancing with a girl, hanging out with his friends. My favorite pictures of him were of him with the California Scholarship Society. One photo everyone looks very serious, the next smiling. Andy is in the corner, hands clenched, ready to seize the world. In another picture, everyone is looking at the camera, wearing sunglasses. Andy was doing his best Tom Cruise, looking cool. 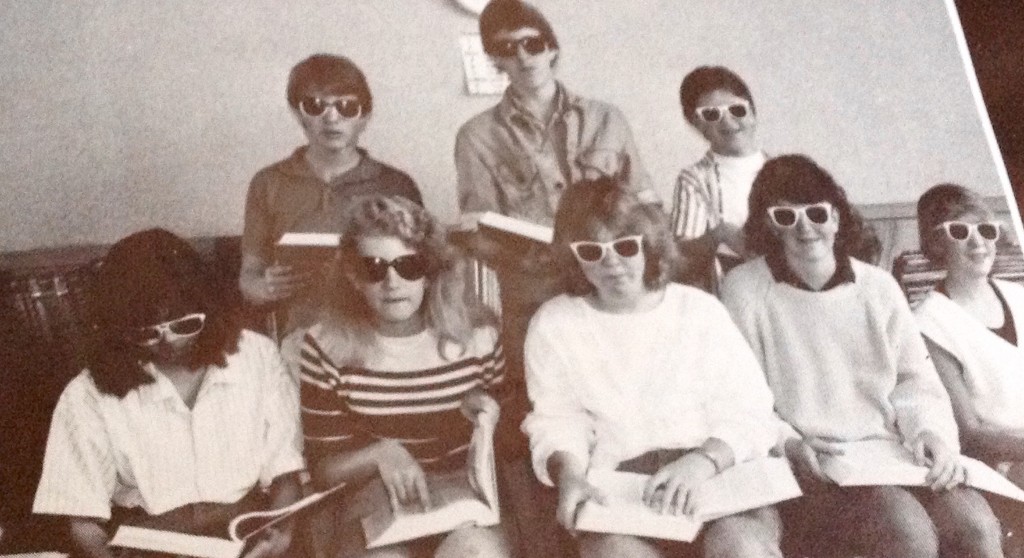 My junior year people were friends with everyone. The homecoming queen hung out with the hippie girls. The dark-haired girls shared their love for Red Hot Chili Peppers. We watched a girl’s video for cheerleading tryouts. Andy was friendly with us all.

I wrote and wrote. We all did. For the first time I felt like I was part of something, a tribe. One Friday night we all met up then went to place to place, seeing what it was like late at night, trying to get material. We met up at the local Lyon’s to have an early breakfast. I kept on thinking, Wait, the popular people are here! Are they going to want to eat with us? Andy was there, and he made sure he got a big breakfast of pancakes. One time he brought cereal for people to eat, Lucky Charms.

He also loved heavy metal. One time he walked over to my friend Satya, who also loved heavy metal. “You will love this,” he said, putting a mix tape in his hands. He played a Megadeath song in class called “Hook in Mouth” with these lyrics: F is for fighting R is for red, ancestors’ blood in battles they’ve shed. E, we elect them E, we eject them, in the land of the free, and the home of the brave. D, for your dying, O, your overture, M, they will cover your grave with manure. This spells out freedom; it means nothing to me, As long as there’s a P.M.R.C. I was always shocked he liked heavy metal. I wanted to ask him, Wait, aren’t you supposed to like jock songs? I can’t think of any jock songs, but let’s just say “Hook in Mouth” doesn’t spring to mind. But that was Andy. He loved heavy metal and didn’t care if people got it or not.

He was elected homecoming king. Yeah, I voted for him. When I found out he won, I thought, Oh, wait! I know him! It was like knowing a celebrity. There was an awkward silence when he walked in Monday morning. He smiled shyly, almost embarrassed. The queen that year was named K (I’m using her first initial to protect her privacy). She was one of those people who seemed to have it all. She knew her cholesterol count, was kind to everyone she met, and was active in swimming. She was part of the Lawn Chair Club, where she and her fellow swimmers sat on lawn chairs in the grass, wearing oversized jackets and thongs.

One day in late February, I walked in to see Andy and his friends writing something on the board. It looked like brackets. “What is that?” I asked.

He looked at me. “It’s college basketball time. We have to make our picks.”

It was a very serious discussion. The only thing I knew about college basketball was that twice a year it preempted Guiding Light. While he was a jock, he certainly wasn’t the jock stereotype. He brought to mind another John Hughes character — Ferris Bueller when the school secretary talked to the principal: “The sportos, the motorheads, geeks, sluts, bloods, wasteoids, dweebies, dickheads — They all adore him. They think he’s a righteous dude.”

At the end of the year we put out a literary magazine. Several people were on the quad, trying to sell our wares. A girl called Andy over from where he was sitting. “You have to help us,” she pleaded. “Nobody is buying the magazine.”

He took an issue of the magazine. Held it up. “Hey, everyone! The Creative Writing class just put out a magazine! I’ve read it; it has really good stuff in it! So come on and buy it!” People looked at him. See, I wouldn’t be brave to do that. Andy was incredibly brave.

School years must end. Andy was accepted at UC Davis. He was nominated for the Golden Warrior award, the award given to the senior with the most school spirit. He didn’t get it, but it was one of those times when it was an honor to be nominated. When I went to graduation, I wanted to tell him congratulations, but felt shy. He was, of course, surrounded by people.

Sometimes I thought of Andy, how he was doing, if he was writing. Our teacher Jane Juska became famous when she wrote her memoirs, A Round Heeled Woman, published the year she turned seventy. I thought of him when I heard K died in a tragic, senseless way. I looked at their homecoming photo again in the yearbook: Blonde and lovely, they had the whole world at their fingertips. 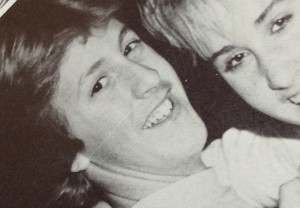 Last fall I learned Andy died. How I don’t know; it’s none of my business. He was surrounded by family. He was forty-two, a month older than me. Here’s another kicker: It occurred two weeks before the 21st anniversary of K’s death. I was emotionally gutted the rest of the day, crying several times. I cried for Andy, for that time of my life when I was starting to take writing seriously. There are pitch perfect times in your life. The kicker is you really don’t know it’s perfect because there are things you have to deal with: teachers who make you ask for permission to go to the bathroom. Hearing a principal give you a lecture on conduct. Not understanding math. My junior year, though, anything was possible. Andy made it possible.

When we learned of his death, all of the princesses, the geeks, the basketcases, the jocks, the sportos, motorheads, sluts, bloods, wasteoids, dweebies, dickheads, hippies, deadheads, band geeks, drama geeks, cheerleaders, metalheads, bohemians, we all mourned our homecoming king of 1989, Andy Jones. We still do, a year later. He was a righteous dude.