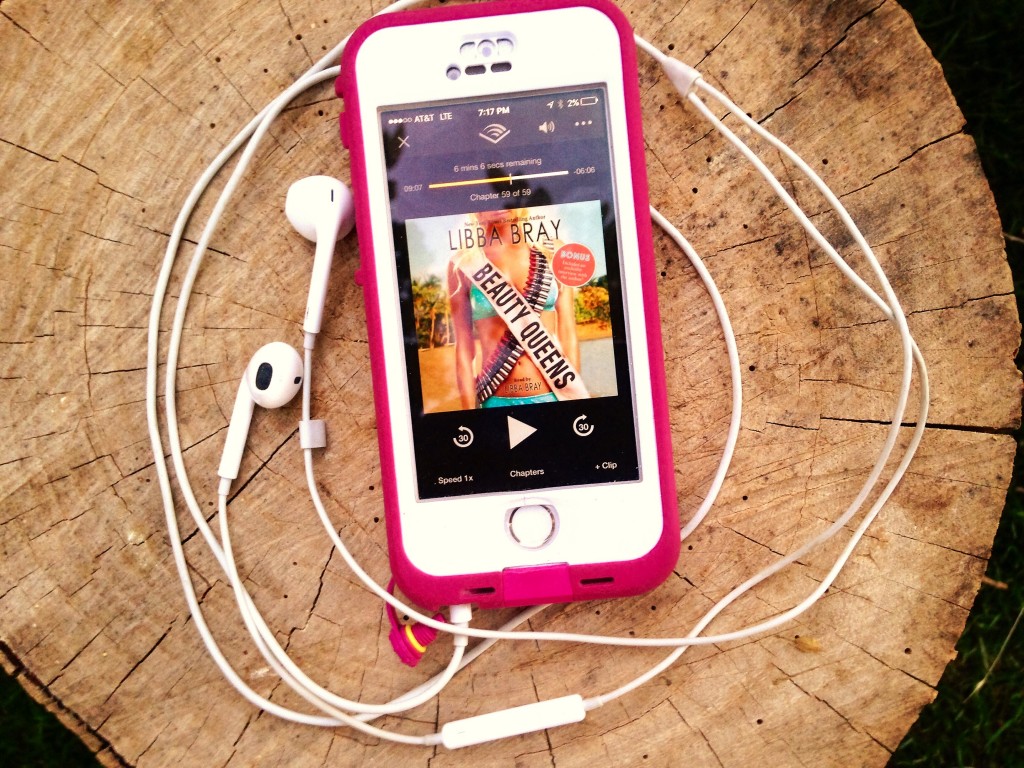 Oh boy, have I got an audiobook recommendation for you! Beauty Queens, written and narrated by Libba Bray, is a hilarious concoction of feminism, anti-consumerism, and pirates! The satire, a rarity in the young adult genre, tells the story of a plane full of diverse beauty queens — who are set to compete in the National Miss Teen Dream Pageant — that crashes on a remote island. The thirteen surviving girls struggle to stay alive on the island, to get along with their competition, and to practice their dance numbers for the pageant in case they are rescued. And that is only the beginning of the story. There are so many clever twists and turns, each one “badder and more bodaciouser” than the last. The novel is a clever deconstruction of consumerism, sexism, and racism. Cleverly narrated as a sort of mock TV program, Beauty Queens is a fantastic read/listen.

There is something special about having the author of the book narrate the audiobook herself, and Libba Bray knocks it out of the park. Not only is she superbly talented in writing an entertaining and powerful satire, but she has a voice that can morph into any character. She is phenomenal! All thirteen Beauty Queens and subsequent supporting characters not only have strong fully developed characters, but the voices Bray gives to her characters are perfectly spot on. Hearing the way each of the characters speaks really brings them to life in a way that the text on the page is limited in doing by itself.

Not only is the Beauty Queens audiobook a phenomenal one-woman show, but the sound effects used to tell the story make it feel even more like a TV or radio program. The music during the “commercial breaks” gives the book an authentic show feel while the news show sounds and the radio broadcast sounds give the audiobook a tangible feeling — which all adds to the ongoing critique of advertisement.

The structure of B.Q. is charmingly like no other. Bray develops a strong deconstruction of consumerism throughout the entire novel. Continual mock advertisements are woven throughout the story. Every so often, a chime will come over your headphones, with Bray — in a very charming commercial voice — saying a footnote number and explaining a faux product that’s loosely mentioned. The style really holds a mirror to the not-so-faux media bombardment and insidious corporate messages manipulating our lives every day.

Bray also courageously tackles and pokes fun at the feminine beauty ideal. The pageant girls offer the perfect vehicle to tear down the idea that physical attractiveness is the most important quality a woman should maintain and strive for. Pageants very much represent this idea that the pageant girls have all bought into. However, all thirteen girls are fully fleshed out characters with different perspectives, hopes, and dreams. Through the reading of their pageant questionnaire cards and a clever hallucination sequence, we see how diverse the girls really are. We see their insecurities, their secret dreams, and their fears.  As the novel progresses, the girls each grow into independent thinkers and learn to be true to themselves and not to be sorry for it. In place of pageants, Bray poses the idea of having a GirlCon, a convention all about celebrating girls, which sounds fabulous! Where can I buy tickets?

Beauty Queens celebrates diversity, being yourself, and girl power! The audiobook certainly adds to the novel’s already brilliant comedic genius and wit. Go ahead and give it a listen. I give it five out of five stars — a must-read for everyone!